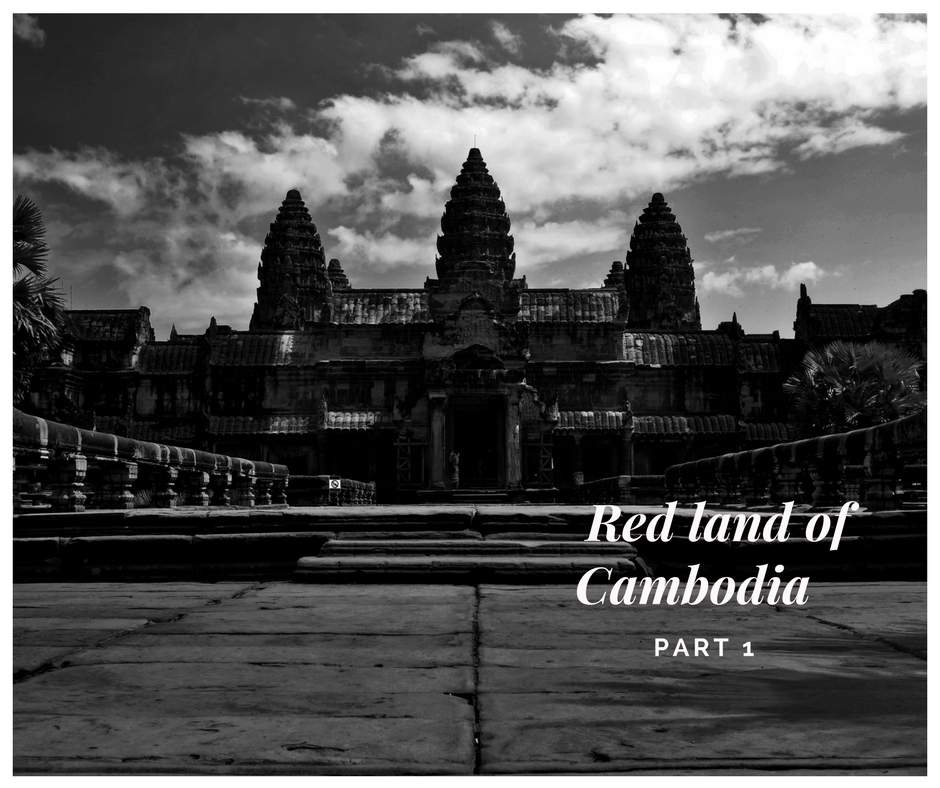 The streets are invaded by these motorized rickshaws, called tuk tuk in Indochina. Any driver who sees me walking, raises his arm and calls me to sell me a ride. Siem Reap, the city I reached overland from Thailand, is a continuous playing of the horn, noise and different kinds of vehicles whizzing in every direction regardless of the traffic flux. At intersections they apply the law of the jungle.

Along the streets tuk tuk drivers rest in the shade of dusty huts on improvised hammocks waiting for tourists to come back from the Angkor temples. The scooters carrying three, even four people, run dodging dexterity roosters, stray dogs, curious and suspicious macaques and hairy black pigs rummaging in the trash on the roadside.

I arrived in Cambodia from Bangkok on a Thai bus crossing the border at Poipet, a squalid border town animated by decaying big-name casinos. Thai citizens come to this place in order to play because in their homeland law prohibits gambling. For them entering the Kingdom of Cambodia is very easy: they just cross the long corridor on the road that leads to Poipet. As citizens of a member state of ASEAN (Association of South East Asian Nation) they don’t need to be subject to customs controls that are required for other foreigners.

Bureaucracy reserved for western people is made of long queues, forms to fill in, stamps, and of course money. A Cambodian visa on arrival costs 30 US dollars and 100 Thai Baht. The first sum goes into the state tills, the second in the border officials pockets. Cambodia, if I’m not wrong, by giving the “bribe” to the officer sitting behind the counter, is at the 160th place in the world rankings for corruption. However, the “tip” is not much: just 3 Euros, a figure that even the most cash-strapped backpacker can afford; and anyway there is no choice, the bribe must be paid, and those who only come with the “official” sum are just sent back, briskly and without any explanation, to the tail of the queue. If you insist, in the end you will get your visa anyway, but getting longer practices and having to queue again several times can be irritating.

The six-hour journey and bureaucracy were not the only tiring and upsetting things of the day. Just a few hours earlier, in Bangkok I had spent a lot of time looking for Mo Chit, the bus station served by the company of buses for Cambodia.

Bangkok is a city that you love or hate, there are no half measures. I love it, but I must admit that it can be exasperating. In Bangkok you can’t take anything for granted, even reaching a big station like Mo Chit, requires patience and your sixth sense. It’s not located at the exit of the so called Sky train terminal, the city subway.

It is instead three kilometres away, after turning several times, without any direction at all. And once there, you must continue in faith searching for it because the first thing you will find is an unattended station with rickety cars parked on a sunny square. This is the city bus terminal, the one for national and international departures and arrivals, which is hidden behind a maze of dark alleys of the umpteenth Bangkok’s street bazaars, among hens perched on tables and sellers of fake bags and mobile phones.