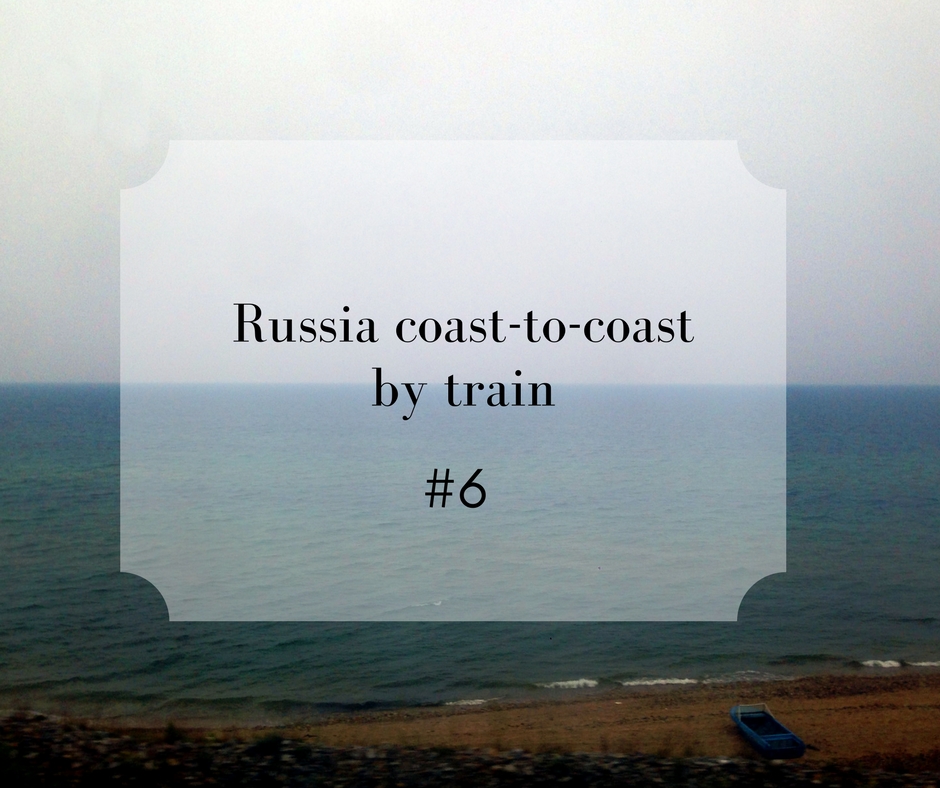 Despite the dilapidated Russian roads, we eventually manage to get to Listvyanka, a small village on the south coast of the majestic Lake Bajkal. A fresh wind blows on the lake shore waving the branches of the forest that borders the battered road pothole. The town is a series of wooden houses in the Siberian style with inlaid boxes and meadows surrounded by trees. A couple of hotels and a rustic restaurant make it a resort for tourist Russian standards. Along the road to the small ferry dock carrying passengers and cars from one bank of the lake, we come across a shabby wooden hut. Katia reads the sign written in Russian and tells me that in the courtyard they have a cage with a Siberian bear inside. Do I want to go inside? Included in the ticket, it is possible to feed him, she informs me excited. My reaction disappoints her: I’m not going to see a sad bear in captivity for the insane pleasure of tourists willing to pay a ticket to feed him.

“But it is for the bear, it’s not to make money. It’s a way to protect him” her explanation is; the worst I’ve ever heard, it doesn’t work any longer even for European zoos, just imagine what it would mean for a solitary house near the Bajkal where they keep the poor animal in a cage for the amusement of bored tourists. 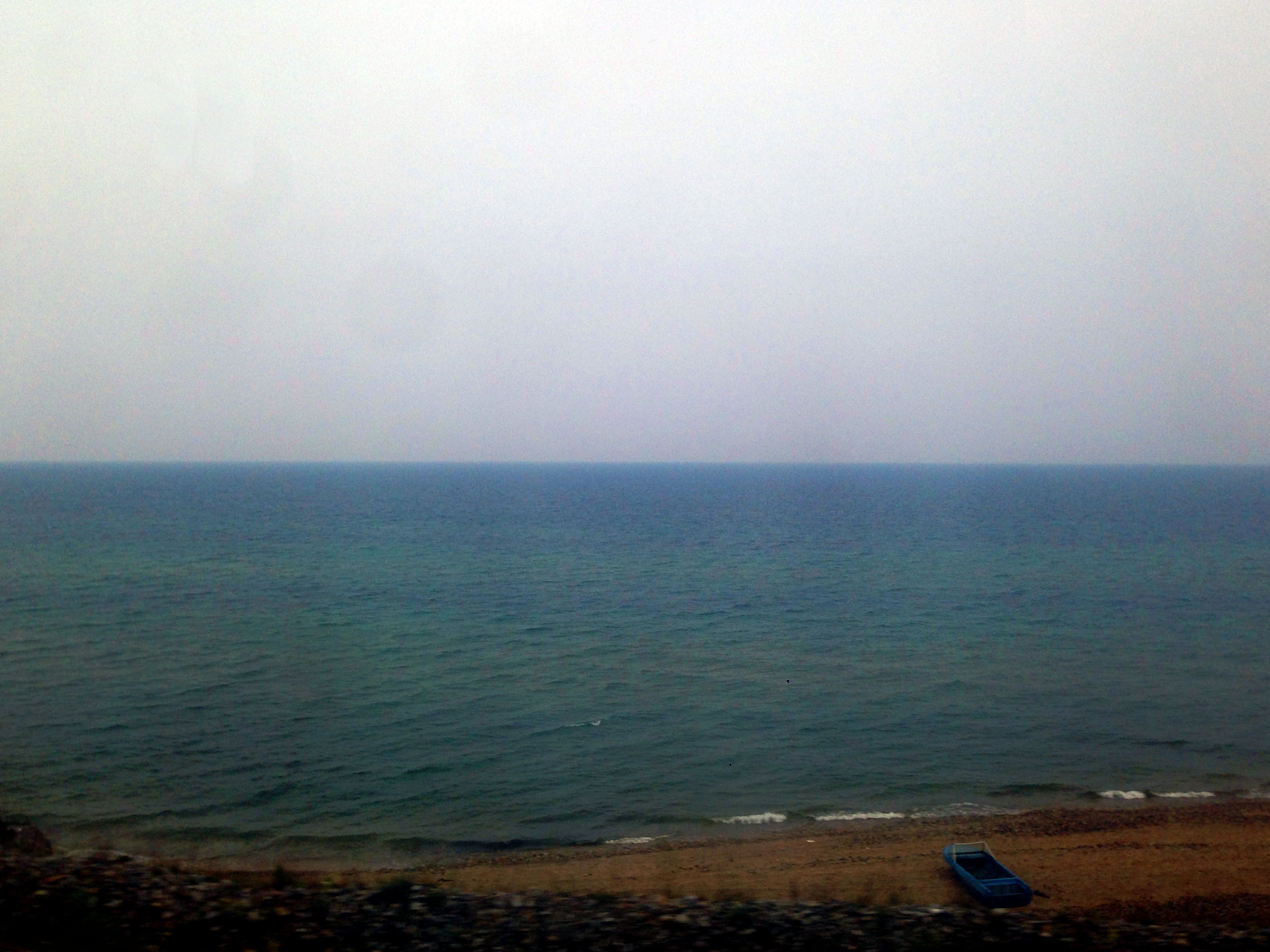 We move on. We have come this far to search Shaman, the rock that according to a popular local legend, also popular with children, was placed at the Angkara River mouth to hinder the flow. It is the torn love story of Angkara River, which originates from the Bajkal Lake and merges into the Enisej River. Legend has it that Angkara is the great lake’s daughter and fell in love with Enisej. She tells her father about her love, but the Bajkal, contrary to this union, throws a rock in front of the daughter’s path in an attempt to block her. It won’t succeed as the two rivers end up joining anyway. According to the shamanistic culture, in the areas around the lake legacy of shamanism is still alive, the Bajkal is a living being. It is the father of the only river that was born, Angkara, and protector of his other 366 tributaries. Among these, there is the Enisej River, the fifth in the world for length, as well as the longest one in Russia. The Shaman’s expectations are high, also thanks to the wonderful landscape dominated by the placid Bajkal and the beautiful fairy tale of love between the two rivers that Katia tells me along narrow paths among the high Siberian birch forest. However, the rock of the legend is a disappointment: just a normal boulder emerging from the flat mirror surface of water, no more no less.

Baikal is the deepest lake in the world, with an average depth of 758 meters and a peak of 1600 meters, and it represents one-fifth of the world reserves of water. Located on two tectonic plates, it is considered a UNESCO heritage for the incredible variety of endemic species that inhabit it: about 80% of the flora and fauna that live in the lake cannot be found anywhere else in the world.

On the Bajkal shores, some brave Russians are swimming in the icy waters of the lake which is at 15 degrees Celsius. I shudder just watching them. With the help of Katia who acts as my interpreter, we start a conversation with the two men. I find out they are not tourists, but they live not far from Irkutsk. I ask them how they manage to swim in such cold water. They laugh. Katia has told them I’m Italian: for them I come from an exotic tropical country. They shrug their shoulders and answer that it’s simple you have just to swim and the body heats up with the movement. Furthermore the fresh water is good for the skin. The lake is beautiful, the say, incredibly clear. “You can see for meters deep” says Dimitri, one of the two men, an impressive blue-eyed boy, driving away with a towel the myriad of flies buzzing all around him. Katia explains that the extraordinary clarity of the Bajkal is due to some 200 species of endemic shrimp that act as a filter, a kind of natural purifier. Despite the legendary clarity of its waters and the surrounding landscape that suggests a corner of natural paradise, the lake is not exempt from pollution problems. One of the biggest threats comes from Mongolia. It is the Selenga River, one of the tributaries of the lake that carries the residue of the untreated waste coming from Mongolian mines. Another problem with which environmentalists are fighting is the plant of pulp and paper production which is located in Baikalsk. The factory, in operation since the Sixties, pours into the lake sulphates and chlorides. Moreover the coal installation in Slyudyanka creates acid rain which ends up in the Bajkal water.

In the afternoon we come back to Irkutsk on a marshrutka, if possible more ramshackle than the one that has brought us to Listvyanka. Walking through the city centre I see many typical Siberian buildings that look like about to fall apart at any moment. Decadent and burned, they are little more than faded wooden skeletons hanging crooked on each side. I point out to Katia, asking surprised if there is not a program for the conservation of this beautiful wooden houses which have become rare architecture in the Siberian cities. Only Tomsk, in western Siberia, can boast embellished elaborate examples of this style. Irkutsk, despite the Nineteenth century buildings thakn to which has earned the nickname of “Paris of Siberia”, is however mostly a Soviet style sad appearance city, made of stern grey buildings and crossed by old trolley buses. On street corners, however, it is not uncommon to see some old wooden house with coloured windows topped by ancient auspicious symbols that, according to the shamanistic tradition of the place, keep away evil spirits.

“No, they are protected and very coveted” Katia replies. “So much so that some businessmen wanted to buy them in order to open clubs and restaurants. People who live there, however, don’t intend to sell their homes. This is why many of these buildings has reduced like that” she says, looking at me with an expression that is supposed to be eloquent, but which I can’t decipher. So, since I don’t get there by myself, she concludes: “Let’s say that suspicious fires have happened. The families who had refused to accept the proposed sale of the property have found their houses burnt down”. She doesn’t say nothing else. She wants to make me realise that they are just coincidence and conjectures…but the suspicion is that someone has set those buildings on fire in order to buy them cheap. The owners do not have the money to renovate the houses destroyed by the fires.

These half burned, decaying wooden buildings sadly hanging at the corners of the streets are all that remains of the traditional Siberian architecture, barely survived the concrete castings that have engulfed the city. A few flashes of decadent poetry forgotten by the pragmatism of modernity.