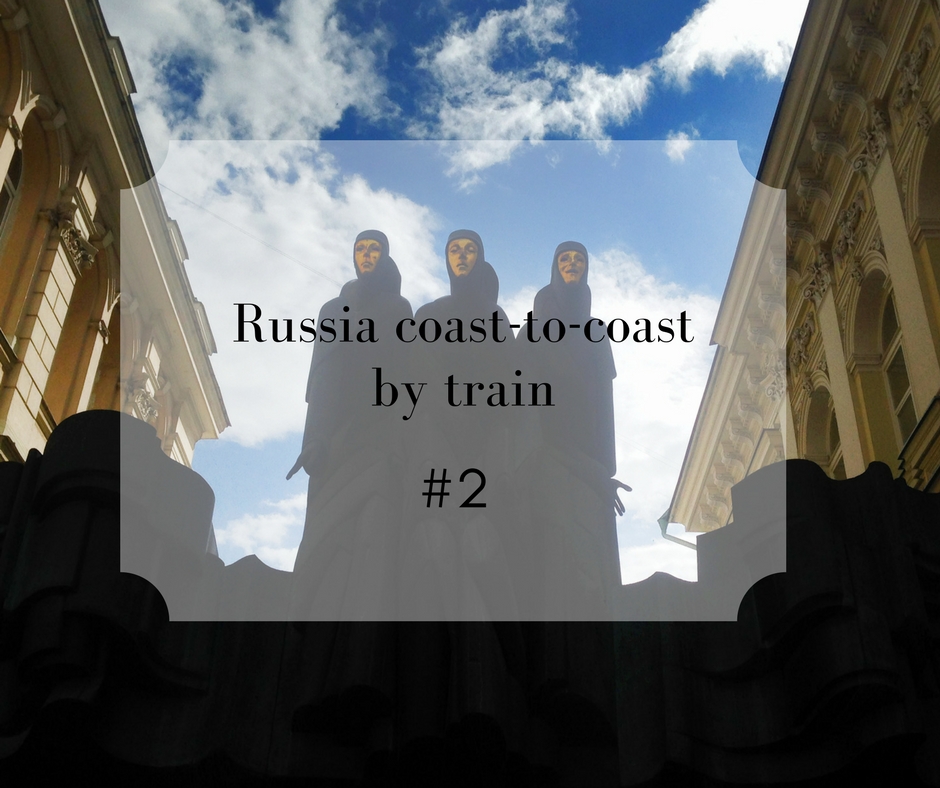 My trip to Russia, oddly, does not begin in Russia, but in Vilnius. I arrive at the Lithuanian capital in the early morning and the guest house, where I’m going to stay, seems deserted. I wait for a while in front of the reception, but nothing happens. I ring the bell on the reception desk a couple of times: nobody comes. Then, I try to call the number written on my reservation slip, but the phone rings useless in front of me. Just when, resigned, I sit down on one of the lobby chairs, I see a tall middle-aged man with greying hair and very black moustache arriving. He wears a white singlet, blue wrinkled shorts and he shuffles the slippers walking lazily. He doesn’t look like a receptionist, however, he is the only person I can see after twenty minutes waiting, so I address him. The man who doesn’t speak English, but a language that sounds like Russian, says something and disappears into the corridor calling loudly someone. When he comes back he tells me something I can’t understand and he goes to sit down at the kitchen table on which some colourful, dirty coffee mugs are disorderly draped. After a couple of minutes, I see a young woman with messy brown hair walking with laboured breathing; she greets me unceremoniously and seats behind the reception desk. She only wears coloured underwear and a white T-shirt; she looks rather sleepy; apparently I am the cause of her rushed awakening. It’s the first time I have made a check-in with a receptionist in her underwear just getting out of bed, but I will soon understand that the guest house where I am to stay for the next days is more than just a place to sleep at; it is actually a home for workers of Slavic origin. 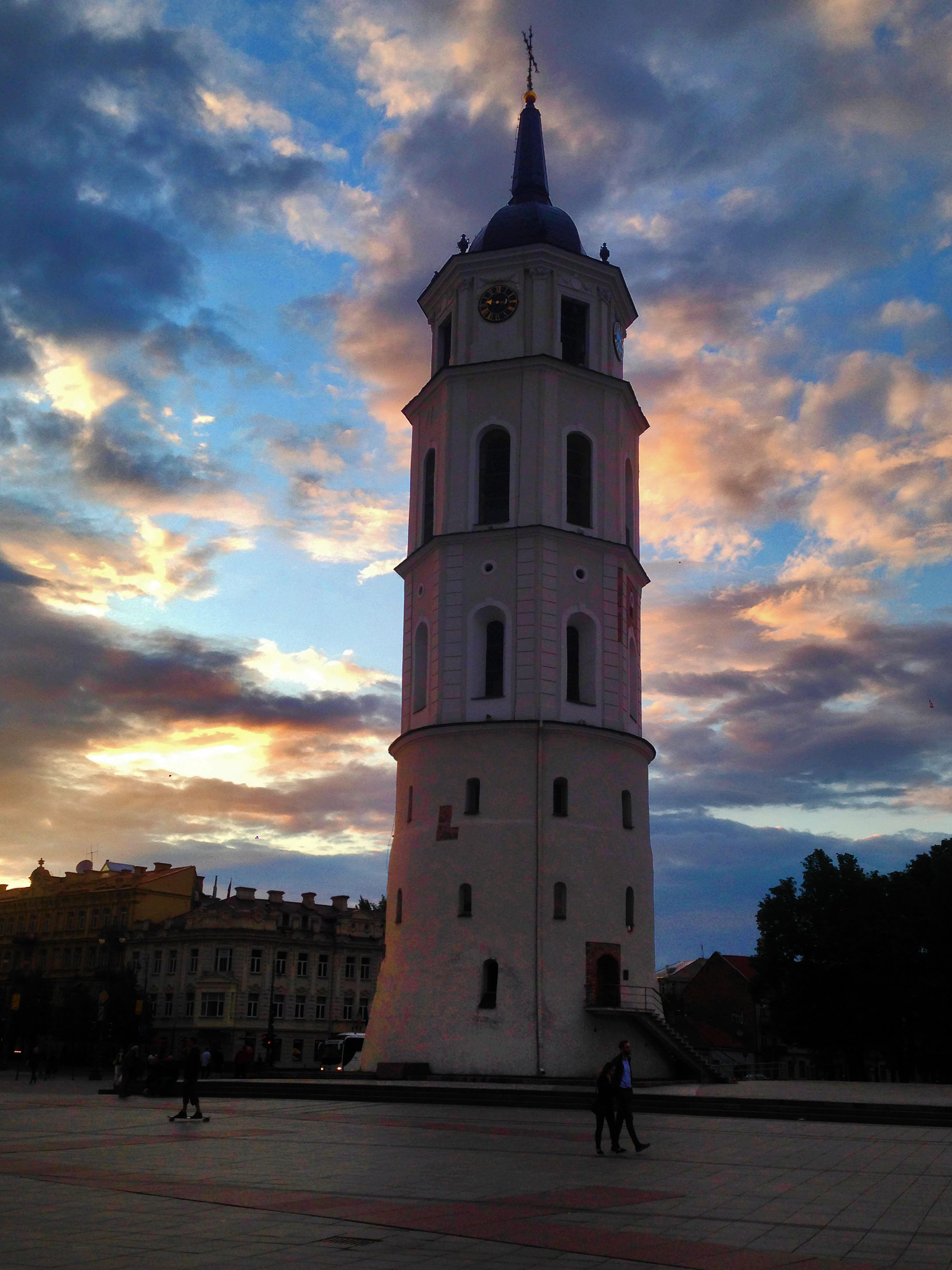 In the hostel, indeed, there is an atmosphere of large family, and I happen to be the only guest with tourist purposes. The others live in the guest house and they are in Vilnius for work purposes, not for visiting the city. I understand this that same evening while I’m sitting on one of the chairs in the common room reading a guidebook. Some people are busy cooking something, others are drinking ice-cold bottles of local beer. A guy stops at the table next to me to read a paper written in Cyrillic. He smiles, amused by what he has just read, and addresses me speaking a language that bears no resemblance to Lithuanian. I point out that I do not understand what he says, so he begins to speak in a little pidgin English.

“No, I’m not. I’m German, but I’m actually Russian” he answers. I look at him blankly. “Ah, never mind – he recommends – it’s an old Soviet story” he says moving briskly his hand as to chase away a fly.

Those words wake my curiosity up and make me want to know more. We spend the evening in front of several cups of steaming aqueous coffee full of grounds (“we don’t drink coffee, we eat it” Lithuanian people are used to say) chatting until late at night with the grainy feeling of sand between our teeth.

“Can you sleep even drinking so much coffee in the evening?” I ask

“Yes, my job is tiring enough: I’m a mechanic” he answers while rolling a Winston cigarette up “Do you mind if I smoke?” I shook my head. “You know…I can’t stop, that’s why I decided to roll tobacco: so I smoke less because I don’t have the already rolled cigarette…” he explains smiling at me.

Max (the name is of my own invention) is a guy prone to smile, a few years older than I am, tall and with vaguely Oriental shaped eyes. He has the habit of tapping the grey hat that he never takes off with his fingers; for three days on, I have always seen him wearing it. He is from Krasnodar, in the Russian Caucasus, with German-descent parents, but he grew up further east, close to Dagestan. He tells me about the twisted history of Russian Germans, which is also his family’s story.

The German presence in Russia dates back to the eighteenth century, under Catherine II the Great. At that time, the Tsarist empire, attracted by an outlet on the Black Sea, waged a war against the Ottomans and won it, and was thus able to expand its dominance in the North Caucasus. The Empress, a German prince’s daughter and a lover of art (her collection of paintings forms an important part of the Hermitage Museum), embarked on a foreign settlement program in Russia with the aim to promote the population growth and the agriculture in those fertile regions. She offered abandoned lands for indefinite time and she granted certain privileges to foreign farmers who would have transferred into the areas indicated by her. Religious freedom, exemption from taxes and economic aid would be granted to the settlers. The manifesto of Catherine II found the interest of those many Germans who, tried by the Seven-Year War, became attracted by the Tsarina’s promises. In the end they welcomed the invitation to move to Russia. The Volga Germans were later encouraged to settle the Kuban region, in the Caucasus, with the goal to populate with a “friendly ethnic group” a newly conquered territory which was inhabited by a majority of hostile, Muslim nations.

“In 1941, because of the Nazi occupation of Russia, the Germans of the Caucasus were suspected of collaboration and espionage on behalf of Hitler’s government and were thus deported to Siberia and Kazakhstan. They were deprived of civil rights and all their belongings were confiscated. Then they were loaded into wagons destined to labour camps”.

Eventually in 1972 the deported Germans were rehabilitated and they were allowed to go back to their original settlements. “But those who returned found their homes occupied by the Russians. There was nothing left of their German identity in the villages: everything was distorted and turned into Russian. The Soviets had achieved so many terrible and evil things, but, on the other hand, they had brought civilization in the Caucasus”.

“Well…in short, they once lived there like savages: only mountains and sheep. The Soviet Union has brought order, education and culture. But in the end it broke up and those people returned to be wild. Now in Dagestan they are possessed with religion, they only think about Islam, they all seem to be crazy!” he tells me, shaking his head. He greedily inhales a puff of smoke and stares thoughtfully at the white wall for a while.

“And you? What are you, Muslim or Christian?” I ask.

He looks at me with those eyes obscured by a distant sadness and he has a grin. “Me?” He takes a sip of coffee, he lays the mug and he shakes his head again, “I am nothing. I’m an atheist, my religion is life”.

The issue is probably more complex than how Max manages to get rid of it. The struggle between Muslims of the Caucasus and Russia is not new at all. Already in 1816 the General Aleksey Yermelov brutally subjugated the local population and caused the revolt of the Dagestani and Chechen tribes, an uprising that lasted thirty years. The Russians prevailed and started a targeted ethnic cleansing. In the twentieth century, Chechens, Balkars, Caraciai, Ingush and Kalmyks were, along with the Germans from Russia and many others, victims of Stalinist deportations: Stalin ordered to transfer all the ethnic groups suspected of treason from one side of the country to the other. “The Bolshevik fathers brought forth the nations. Stalin deported them” remarks the Russian writer Anya Vom Bremzen. After the Siberian exile, they also were allowed to return, but without giving them the opportunity to obtain any compensation or exercising their rights on the old properties. They found their ancestors’ graves torn: the stones had been used as building material. The Germans could still hope for a return to Germany, besides great difficulties, but those people had no other loopholes: the Caucasus was their land. Hatred, a sense of injustice and resentment had never slumbered and, with the dissolution of the Soviet Empire, the ethnic minorities took the opportunity to take up the fate of their own destiny, exploiting the weakness of the Russian power to advance the first steps towards independence. Gorbachev’s glasnost was the fuse and that “freedom drunkenness” which followed the USSR collapse meant detachment to them.

Around midnight a boy joins our table. He is young, no older than 25, blond and chubby. His name is Nikolaj and is a bricklayer in Lithuania. Max and he know each other: he also lives in the guest house.

“Hey shapka, offer me a bit of your tobacco!” He asks in Russian.

“Here they call me ‘shapka‘, which means ‘hat’, because I never take it off” Max tells me with a mischievous smile handing the rolling paper to his friend.

“No, I’m not. I’m Ukrainian – he answers me back almost offended – Fucking Russia!” He whispers lighting the cigarette in his mouth “Russians only make trouble, they are too bloody nosey” Nikolai says. I understand that he doesn’t feel great sympathy towards Russia. For him it is a bulky and menacing country. Even Max agrees and tells me: “I won’t go back to Russia. No more. Not even in the civilized cities”.

“Yes: St. Petersburg and Moscow. The rest is jungle. Russia is a rich country. Timber, metals, oil, gas, but all this wealth, to whom does it really belong? – He marks a pause and looks at me straight into the eyes – it only belongs to a handful of people, the 1% of the population. It is a ruthless country in which the law of the strongest rules. Today’s Russia is white Africa” he says in a serious way.

The presentation is not very reassuring as in a few days I will be crossing the Russian border. When I talk to them about the journey I intend to do, Max appears concerned for me, travelling alone, by train, from one end to the other of Russia, without knowing anyone nor speaking the local language; it seems crazy to him. He warns me to be careful. He writes his phone number on a piece of paper and he slips it in front of my cup of coffee. “If you need me, just call me”.

I go to sleep with a sense of anxiety, thinking about Max’s and Nikolaj’s words. Listening to them it seems I’m going to embark on a dangerous journey at the limits of unconsciousness. The climate in the guest house only exacerbates my sense of discomfort. Other guests only speak Russian, they are polite, but evasive at the same time. No one talks with pleasure about themselves and they all seem not be appreciating questions. They appear to be running away from something. Max himself, whenever he is asked the reason why he left the Caucasus, he becomes private and awkwardly tries to evade the question.

However if you really want to know something, you have to experience it. Therefore going to the mysterious Russia is the best way to try and understand it. Thus, through the Baltic countries, I will go to St. Petersburg and embark on my so longed Trans-Siberian trip. 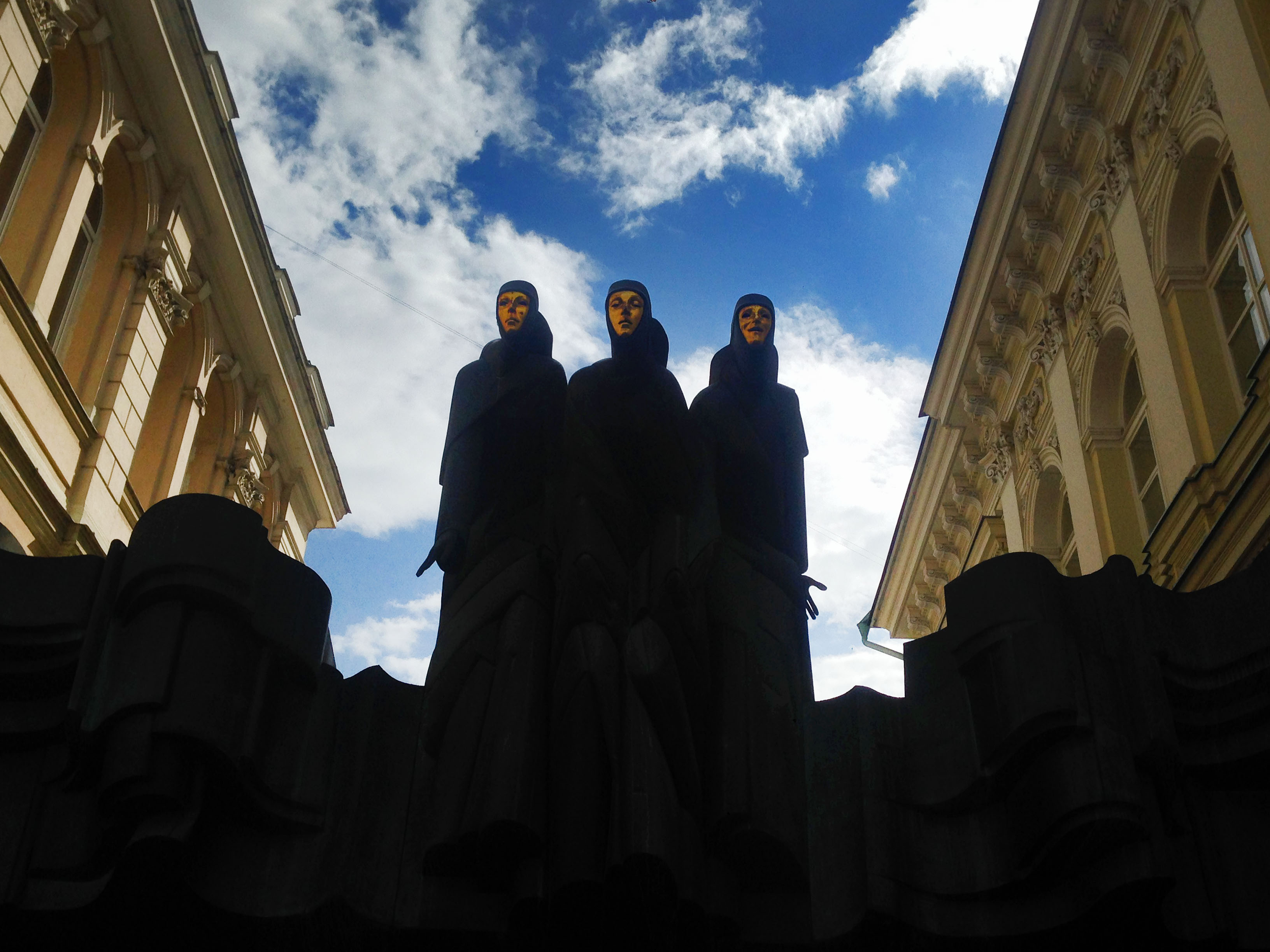 1 pensiero su “German people of the Caucasus, a story of hope and deportations”