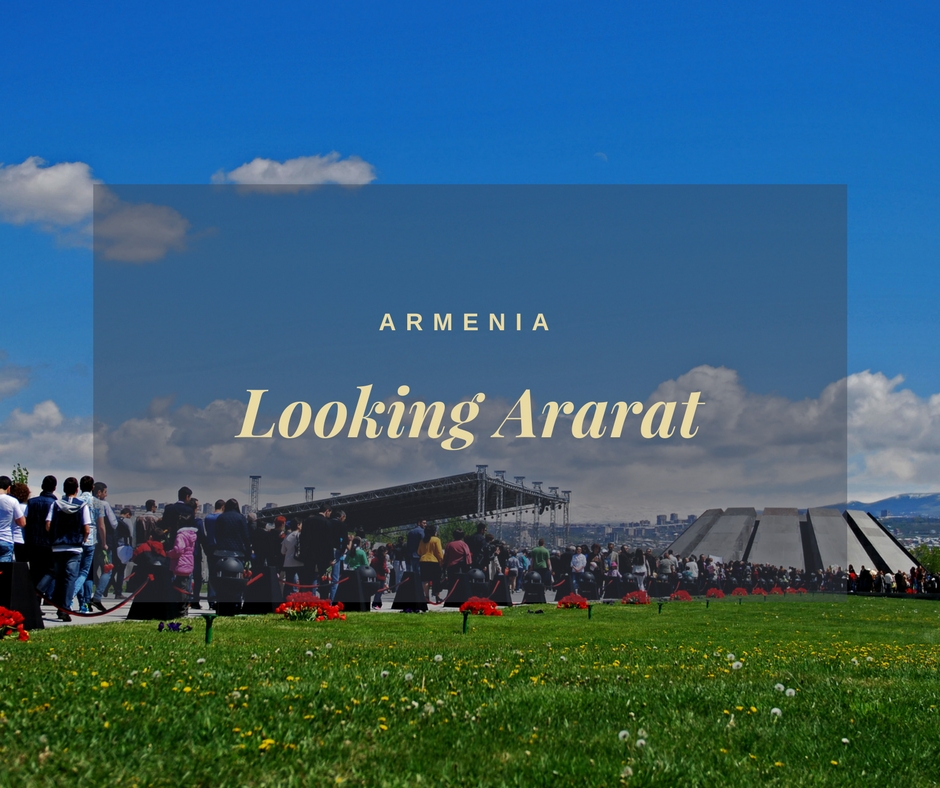 “In Yerevan, on every 24 April it rains!” Krikor point me out, as we climb the hill of Tsitsernakaberd, the memorial for the victims of the 1915 massacres. Even last year, on its hundredth anniversary of the genocide, the rain does not spare the city. Since my arrival, the capital has been invaded by adhesive of forget-me-not flowers. These purple flowers stand out on billboards, pasted at the shop windows as well as on all cars. Men wear forget-me-not brooches and women have some forget-me-not patterned and patchwork scarves. It is the emblem flower for the commemoration of the genocide and, alike everything else in this mystical land, it is full of symbolic values: five petals represent the five continents where the Armenian diaspora mushroomed after 1915. 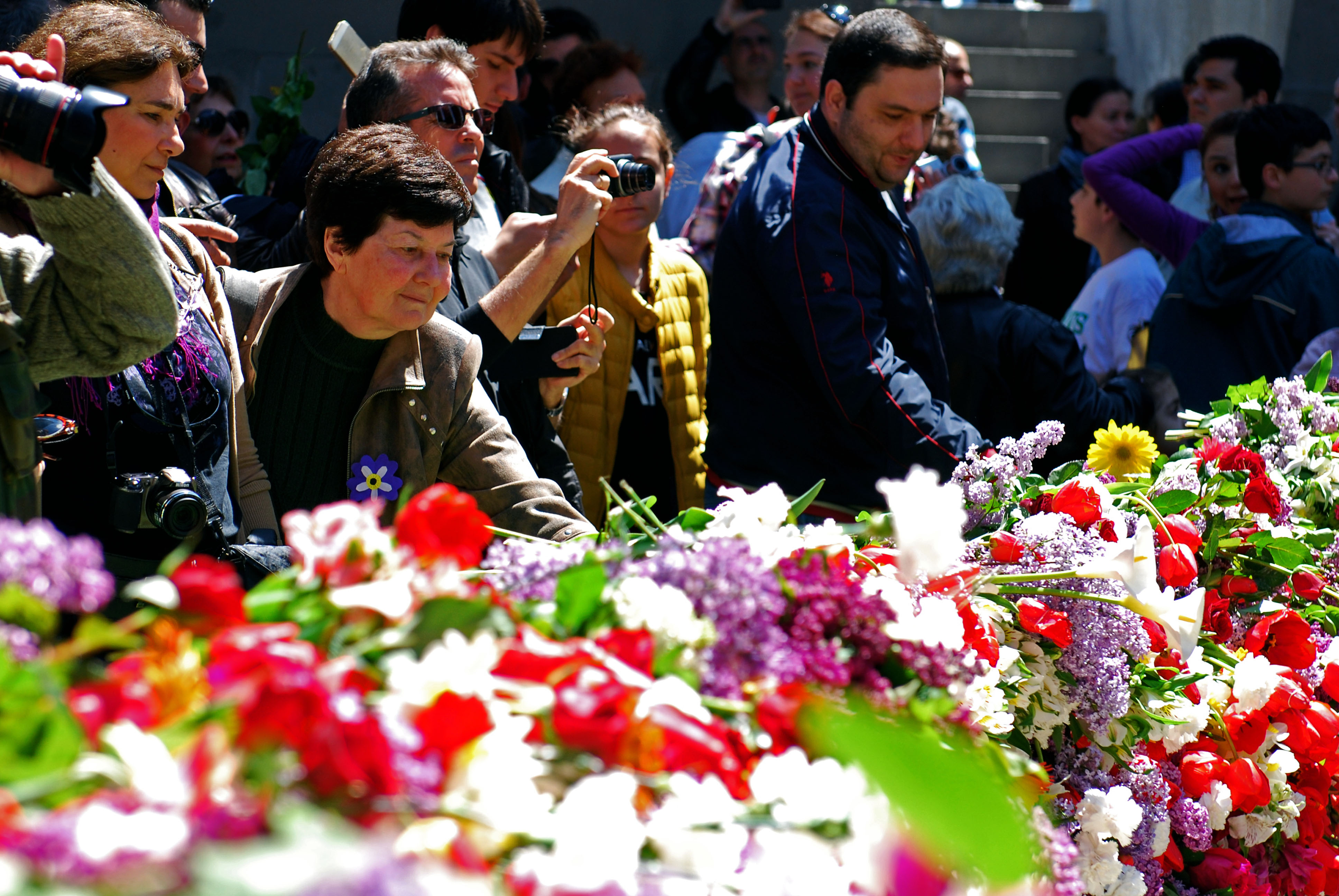 At the top of the hill, where the monument is, I can see a long human cordon made of men in shirts, women bringing white carnations and cheerful children. They are in line along the wide avenue of Tsitsernakaberd. Each of them brings up a flower and places it with silent composure on the flowery crown that surrounds the eternal flame. It is as if the entire city had rushed to a stately and sober funeral at this place. Tsitsernakaberd is empty on weekdays, but it is now filled with a huge crowd, reached the outskirts of Yerevan to commemorate the hundredth anniversary of the Armenian genocide, which they call here the “Medz Yeghern”, “the great evil”.

24 April, the genocide commemoration day, is actually a symbolic date that recalls the events of the night of 24 April 1915 in Istanbul, when the Turkish government, headed by Home Minister Talat Pasha, ordered the arrest and the murdering of some Armenian intelligentsia leading personalities. Acknowledged by some as the beginning of genocidal actions, this date is still the subject of strong debate among the many currents of this genocide modern historiography. Some history experts think that it started years before, with the massacres of 1895-96 under the ruling of Sultan Abdul Hamid II. In that year, a small group of Armenians, hoping to attract the attention of the major European powers on the Armenian issue regarding independence, occupied the headquarters of the Ottoman Bank in Istanbul and quite a few officials were taken hostages. 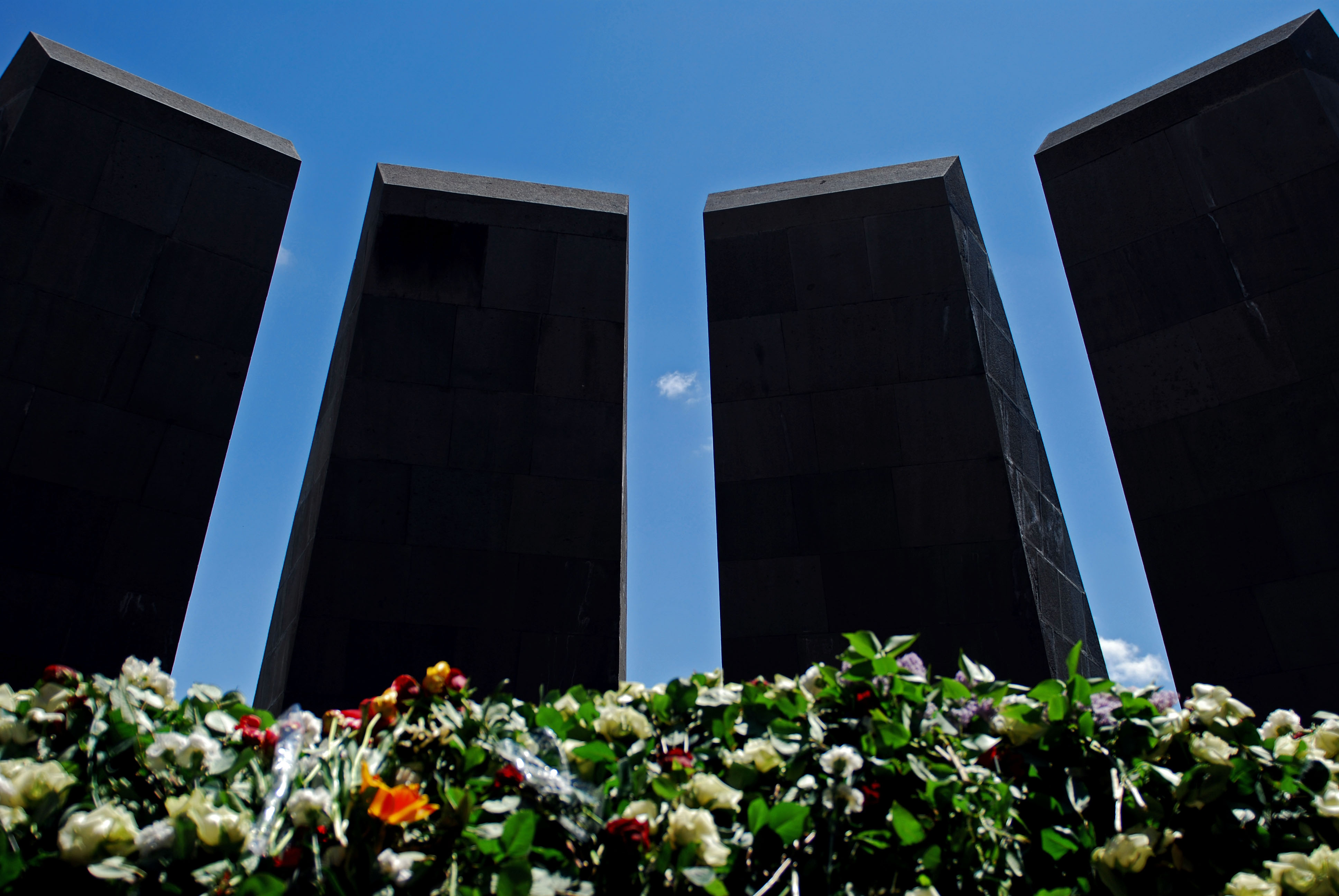 Those responsible were captured and in the following weeks, in the city, armed gangs of Turks massacred Armenian families in their own homes. The hatred spread and the massacre swept into Anatolia provinces where about 300.000 Armenians were slaughtered. In Armenia, 24 April 1915 is now universally remembered as the date of the beginning of the genocide, that is the starting point of a rapid sequence of events that suggested a policy of ethnic cleansing decided from above and which led to the death of over one million and half people. But this is the Armenian version of the story. The Turks do not even want to hear the word “genocide” mentioned. Their point of view is completely different and ever so distant. Armenians, they say, are just some of the victims of the events of World War I, during which so many Turks also met their death.

When I ask Krikor about the reason why Turkey insists on denying this cruel genocide, a century later, he dismisses the question by saying that the Turks don’t know anything but destruction. Annoyed by such an offensive and superficial answer, I insist, and I can get a more rational explanation. He explains that in those years, the Ottomans seized the goods and belongings of the deported Armenians. “The Armenians were well-off, a few of them extremely rich. Today, if Turkey admitted to be the architect of the genocide, it should compensate the relatives of the victims and would have to condemn all those war criminals held responsible for the massacres”.

Armenians were disliked by the Turks not only because they were considered a foreign body in terms of ethnic group, language and religion, but also because they represented a slice of the wealthy population with a strong sense of identity. They were therefore considered as rebels and suspected of collaboration with the Russians, hostile to the Ottoman Empire during the World War I. They were also labelled as internal enemies. Indeed there were some sympathizing elements with the Russian blockade; moreover, being a minority under the Ottoman dominion, they had never been very beneficial to anyone at all. In Turkey, talking about the Armenian or the Kurd genocide is considered as an insult to the national identity, an offence punishable under article 301 of the Criminal Code. Turkish journalists, reporters, bloggers and intellectuals include Orhan Pamuk, Nobel Prize laureate in Literature in 2006 for his astonishing and powerful “My Name is Red”, and famous writer Elif Shafak (author of the 2006 novel, “the Bastard of Istanbul”, a must-read!) were some of the victims of that unacceptable law. 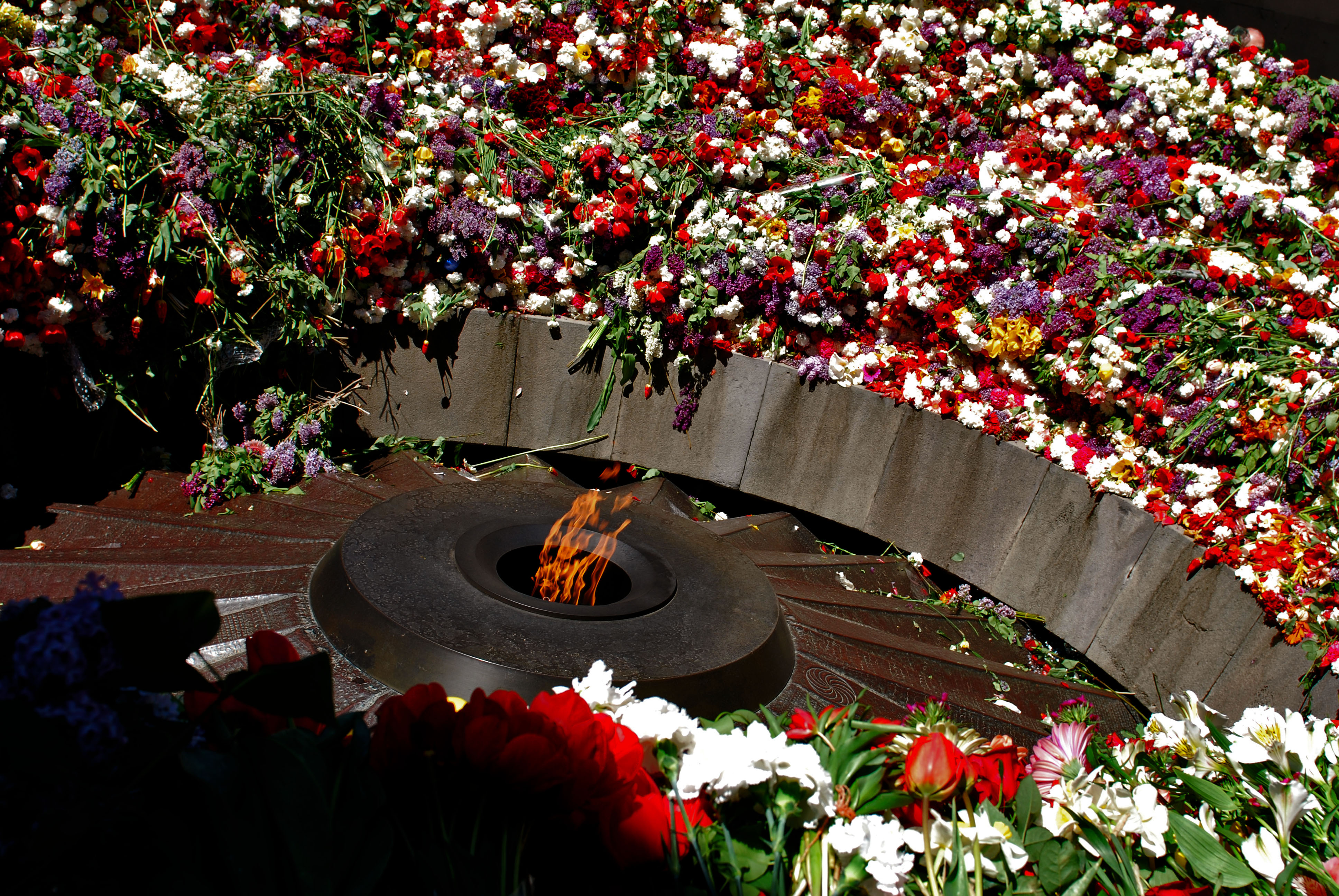 So, it was no surprise when on 12 April 2015, Pope Francis made some Turkish government representatives upset when defining “genocide” the massacre of the Armenian community in 1915 (the Vatican with Pope John Paul II acknowledged the Armenian genocide in 2001). Less predictable instead was the Turkish response to the commemoration of the genocide in Yerevan. Not only did Erdogan not accept the invitation from Armenian president Sarksyan to take part to the celebration of the centenary, but he also diverted the world’s attention on Armenia; he postponed the celebration of the Gallipoli campaign, during which, in 1915, the Triple Alliance tried to conquer Istanbul in vain, so to coincide with the genocide commemoration in question. Normally, this ceremony is held in March since the Anglo-French fleet was forced to retreat on 18 March of the same year, after severe losses. Armenia, which was invited by Turkey to the celebration in Gallipoli, did not appreciate it at all and considered it as an outrageous affront: a mocking rejection by the Turkish government to come to terms with its own history. In this way, the majority of states throughout the world, invited on the same day in Turkey and in Armenia, found themselves facing a delicate choice: go to Yerevan, implicitly acknowledging the genocide or go to Chanakkalle snubbing and ignoring Sarksyan’s invitation. Only the heads of states such as France, Russia, Cyprus and Serbia took part to the celebrations in Armenia. Vladimir Putin, who was in good terms with his Turkish counter part, just before a Russian aircraft was shot down by the Turkish Air Force, travelled to Yerevan (Russia officially acknowledged the Armenian genocide in 1995!), and sent a delegation to the Gallipoli campaign celebration.

The first country to officially admit the Armenian Genocide was Uruguay in 1965, gradually followed by 22 other nations including France, Germany, Italy, Switzerland and Canada. 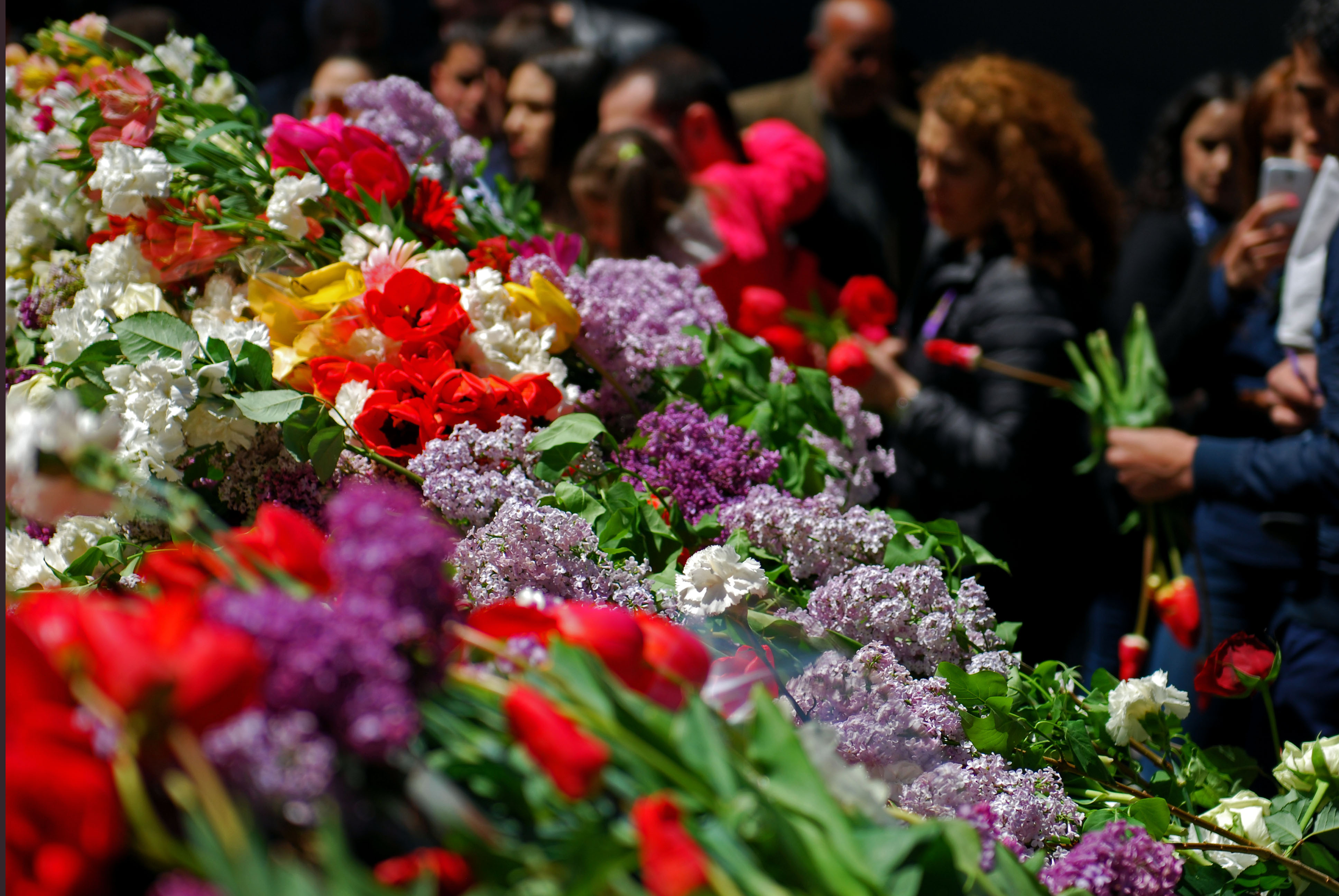 The United States however, despite the thick Armenian community present on its territory – the US diaspora community is second only to the Russian one – refrain from taking any crystal clear position. On 4 March 2010, the Foreign Affairs Committee of the US House of Representatives voted a motion on the Armenian Genocide by the skin of their teeth: only 23 votes in favour and 22 against; but the document is not legally binding. On top of this, President Barack Obama, in April 2015, was careful not to use that word, “genocide”, which Turkey is so much disturbed and bothered by, referring to it with a more suitable “terrible massacre”. He therefore did not stick to the commitment he had made during the 2008 election campaign in order to acknowledge the Armenian Genocide.

France is pretty far ahead as far as this issue is concerned. Not only did she (France) acknowledge Medz Yeghern, in 2001, with a peculiar and tailored law, but she also tried to introduce penalties for all those Armenian genocide deniers. The proposal was rejected on 28 February 2012 by the French Constitutional Council that labelled it as “an unconstitutional threat to the exercise of freedom of expression and communication”.

Among all the nations, Israel has undoubtedly the most interesting point of view. Looking into the Jews and what they had to go through, especially during World War II and all the events that led to the birth of the state of Israel, you would expect an immediate acknowledgement, almost an automatic one, of the dreadful Armenian Genocide. Instead, in order to avoid undermining relationships with Turkey, no Israeli government has ever sided with the Armenians. The Israeli official position emerged in November 2001 in the course of an interview on the Turkish Daily; Shimon Peres, the Israeli Foreign Minister at that time, belittled the Armenian Genocide claiming: “There has never been anything such as the Holocaust. What the Armenians had to go through was but a true tragedy, not a genocide”. By defining “meaningless” talking about the Armenian Genocide claim, he forgot that this word was coined by Raphael Lemkin, a Polish Jew, in reference to the massacres of 1915 against the Armenian people.

After queuing for a while, we can finally get into the Genocide Memorial Museum, renewed and expanded for the centenary. Going up the stairs, I manage to see the notorious and disturbing words expressed by Hitler regarding the 1915 massacre, written on a wall. In 1939, during a speech in which the “Fuhrer” announced his intention to invade Poland, many became concerned about the future impact that a such brutal invasion would have caused. To reassure even the least perplexed ones, Hitler replied: “Whoever can remember today the massacre of the Armenians?” 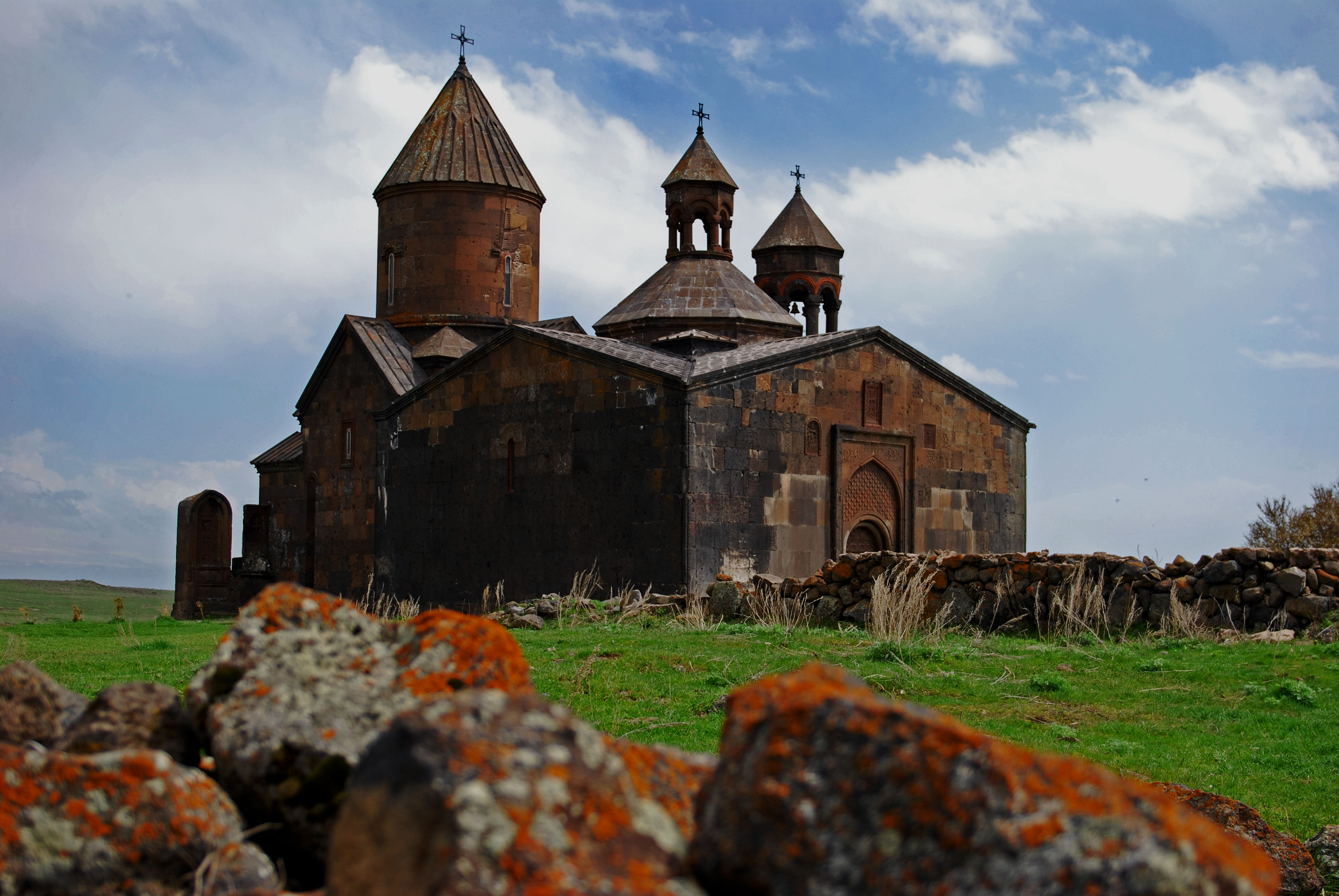 It is my last day in Armenia. Since my flight to Vienna leaves in the middle of the night, Krikor has kindly offered to host me in his house before driving me to the airport. We enter a grey and Soviet style building. Krikor walks in front of me. The entrance door is wide open, broken for ages, nobody cares about fixing it. The walls, painted in a vague ochre colour, are chipped and keep losing pieces of plaster. We then enter a tight elevator – Krikor lives on the sixth floor – and I look at the walls lined with advertising posters and bills. “It is a novelty, a true newness of our recent years!”, he explains; “once upon a time, there were no advertising posters in apartment buildings”. Krikor’s wife welcomes us with a broad smile standing at the doorstep. She is a beautiful woman, she has curly raven hair which frames her cheerful face. She let me sit down and offers me tea accompanied with dried fruit. She introduces herself: her name is Anoush, (like the protagonist of Hovhannes Tumanyan’s masterpiece, one of the outstanding Armenian writers, she explains me) and she is an opera singer. She immediately apologizes for her quite poor Italian, which in my opinion is pretty good, telling me that she has no way to practice it. Italian is a language that she loves; the same applies to her feelings towards Italy, where she often goes on business. She asks me a myriad of questions, such as “did you like Armenia?”, “What do you think about it?”, “What about the food?”, “ the landscapes?” Krikor and she stay awake until quite late to entertain me. She is ever so happy to have a visitor and keeps filling the dish with all kinds of sweets, talking about her love for Italy. But in the end it is time to go, I express my heartfelt thanks to her as Krikor and I set off to the airport.

It is cold outside and the fresh air tingles my skin. Through the window, I watch the city flowing away from my eyes. As we drive in the distance, the lights decrease and disappear almost completely. In the black sky, cleaned by the last rainy days, some timid stars appear and shine. 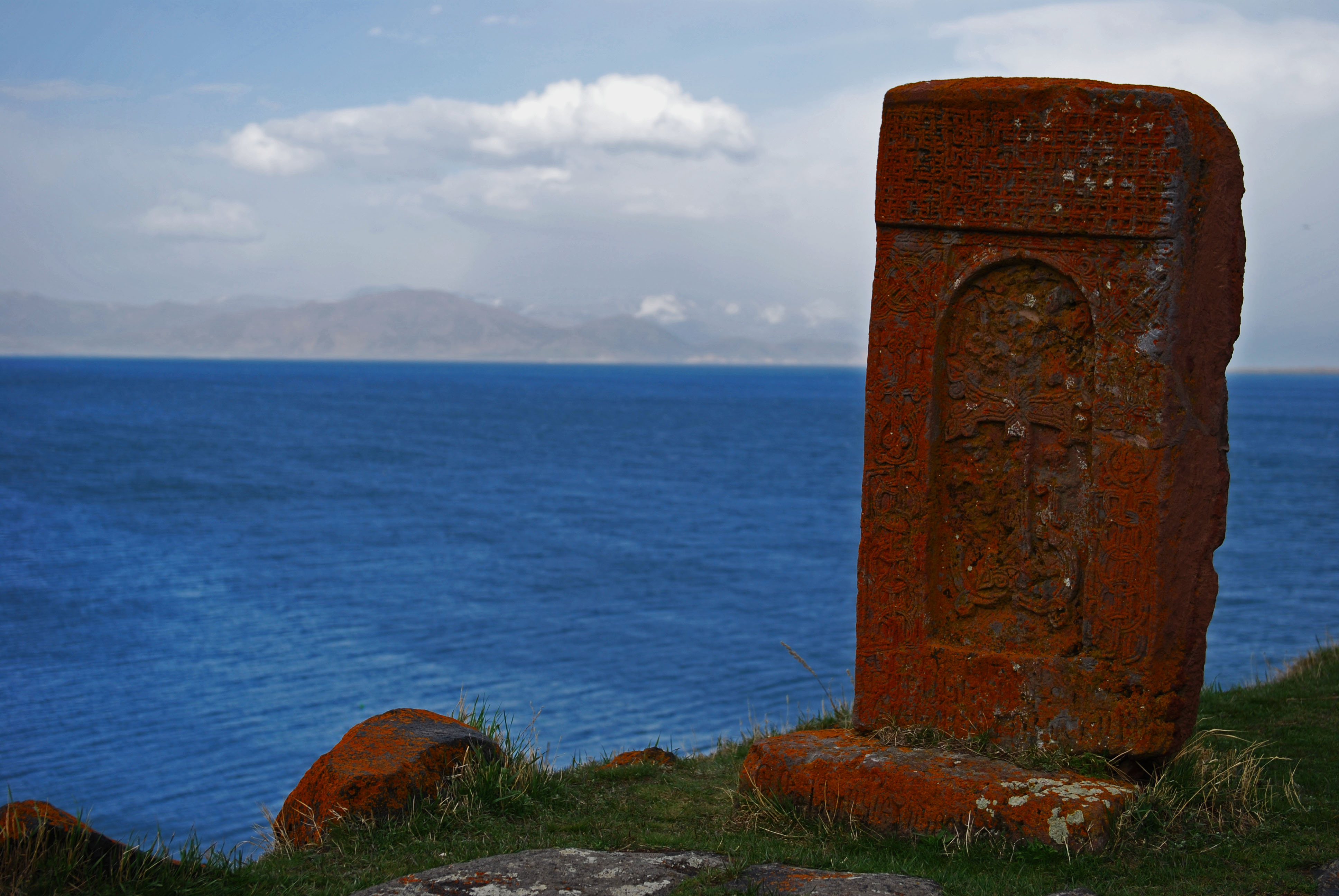