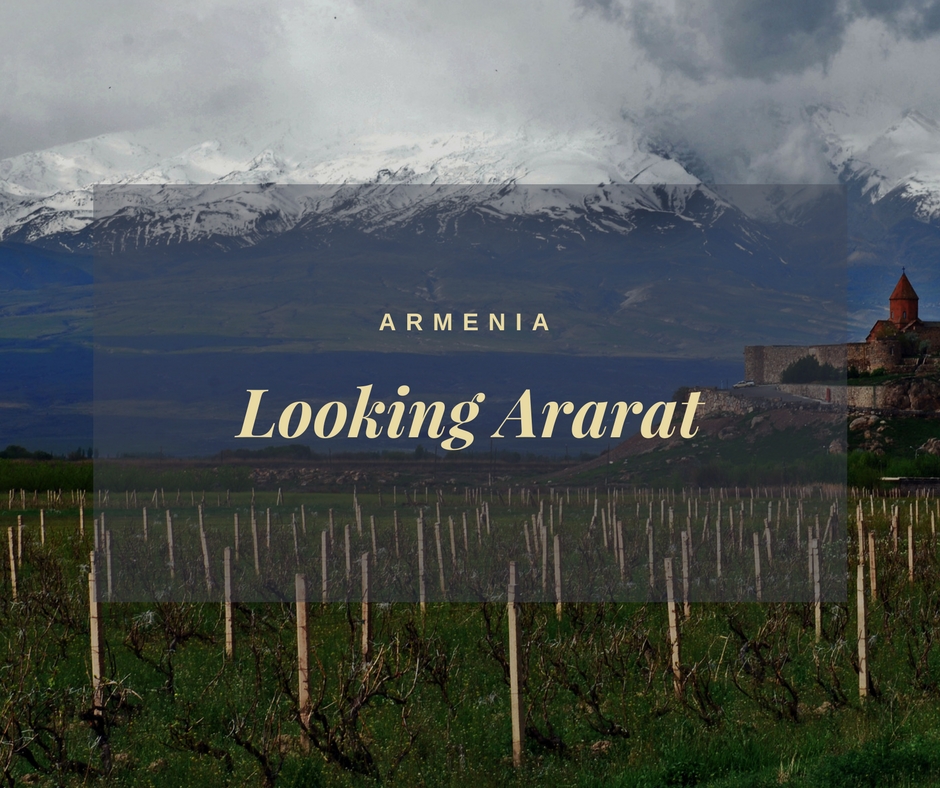 I have to confess that my first contact with Armenia quite puzzled me. I thought it was a spiritual, mystical and romantic place. Instead, I found myself in a poor country, made ugly by the ungraceful Soviet architectural heritage, which managed to get that wonderful Armenian architecture flattened till it became a vanishing souvenir. Afterwards, having run along ancient tracks of the silk road, explored magnificent rocky gorges and admired crumbling hidden among the mountains, I reconciled myself with this gloomy country.

I landed at Zvartnots, Yerevan’s tiny airport, in the middle of the night: all flights from and to Western Europe are nocturnal, and mine stuck to the rule. Krikor is waiting for me. A middle aged, robust and grey bearded man; his eyes are sad and he will be my guide in my short journey around Armenia. Despite his grim look, Krikor turns out to be ever so very kind and welcoming, immediately full of attentions and willing to help. I find out that the battered look of the cities hides friendly people, really happy to welcome foreigners. The Armenian spirit of hospitality is authentic and genuine, uncorrupted by the cold rules of mass tourism.

It is the first time I have been in a former Soviet republic and although modernisation pushes ahead, the traces of the Soviet past are still visible. Often they appear as unhealed scares.

Yerevan is a bare capital, of a moderate beauty, glorious and demure at the same time. Glorious, but also shy, it looks like it’s forcing itself to appear more majestic than it is. Sometimes it succeeds, but just turn the corner and you will breath the dust of the construction yards which are trying to doll it up.

The Opera Park, with its open-air cafès and the relaxing atmosphere happens to be a pretty place where you may spend an afternoon, but within a short walk you can see some shabby Soviet apartment buildings made of pink rock-tuff.

The emblem of this duality is the Cascade Complex, one of the symbols of the capital, the epic monument built in 1970 to celebrate the 50th anniversary of the Soviet Era. It is an impressive staircase made of white stone, which goes up through the city centre to offer you an awesome view of the whole capital city.

Looking at the staircase upwards, the structure looks like a huge waterfall running down towards the city. This is the reason why it is referred to as the “Cascade”. Climbing the stairs you can stop and admire the big statues decorating each level of the complex. Modern sculptures and waterless fountains along the hill are following each other making the Cascade a kind of an outdoor art gallery. But the outstanding and astonishing view is suddenly stopped near the bottom, where the monument becomes a building site: the Cascade is actually incomplete and the construction is put on hold. The first part was completed in 1980; afterwards, the work was left unfinished and it was only in 2002 that Gerald Cafesjan, an Armenian New-York industrialist, provided the sufficient funds to resume the reconstruction works. At the moment the Yerevan Council doesn’t have funds to complete this monument. 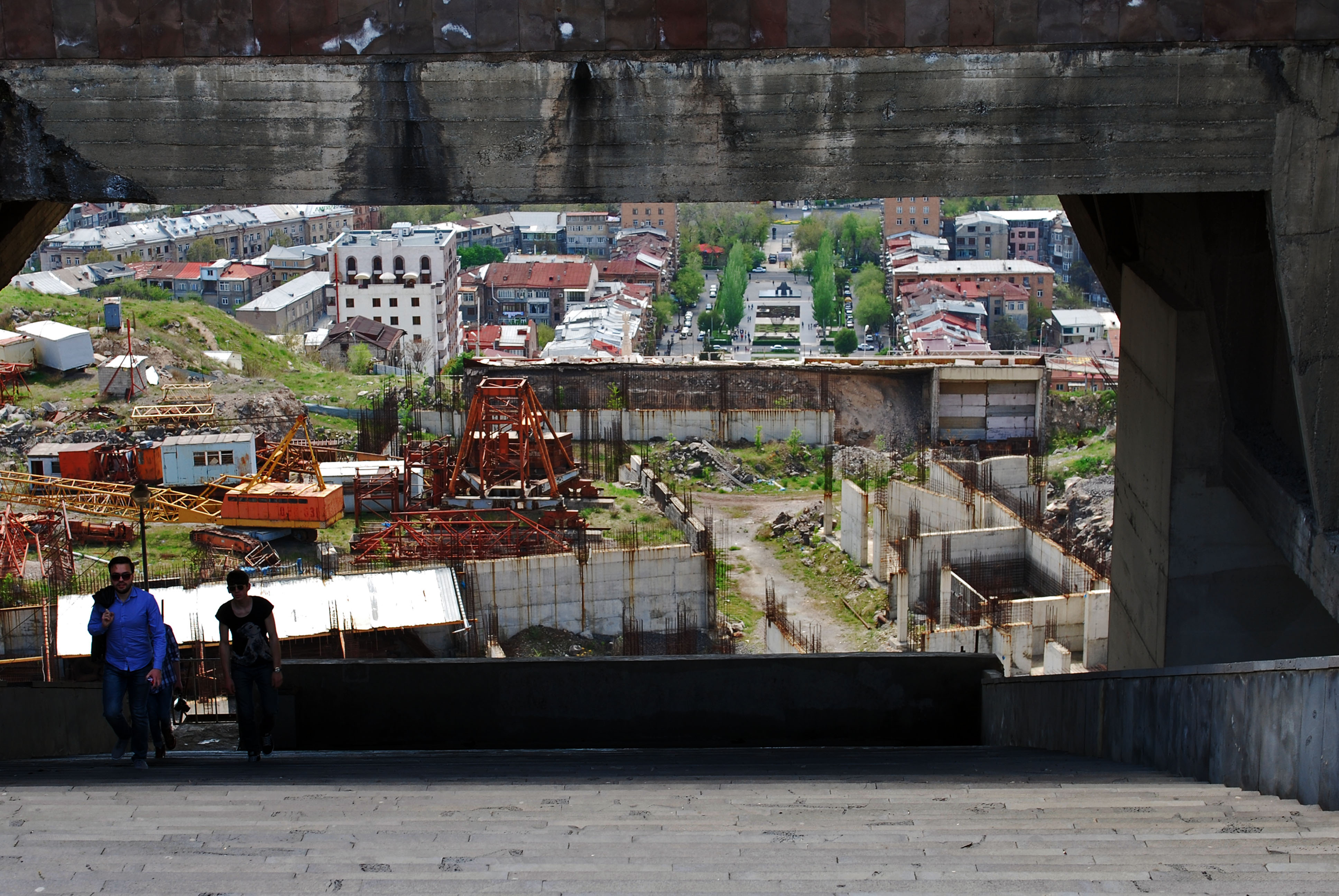 From the Cascade it is possible to reach Haghtanak Park (Victory Park), that hosts a small amusement park with some threadbare carousels. Grass bushes peep out the paved tracks, broken pavements and abandoned lawns surrounding the few rusted carousels give the park a nonchalant carelessness tone. It reminds me of the parks of Bucharest where I used to go with my grandparents when I was child. The kind of atmosphere which is halfway between the sensation of grief and dignity that moves and rises tenderness. Opposite the park, on a massive pedestal made of basalt where until 1967 the statue of Stalin dominated, today, Mother Armenia is standing proud: the impressive of 22 meter-high monument looks in the direction of Mount Ararat. While playful children play on the square outside and climb alike monkeys on the tanks and jets left behind from the Soviet Era, Mother Armenia with her sword, and her stern, Amazon eyes, swears to protect Yerevan at her feet. 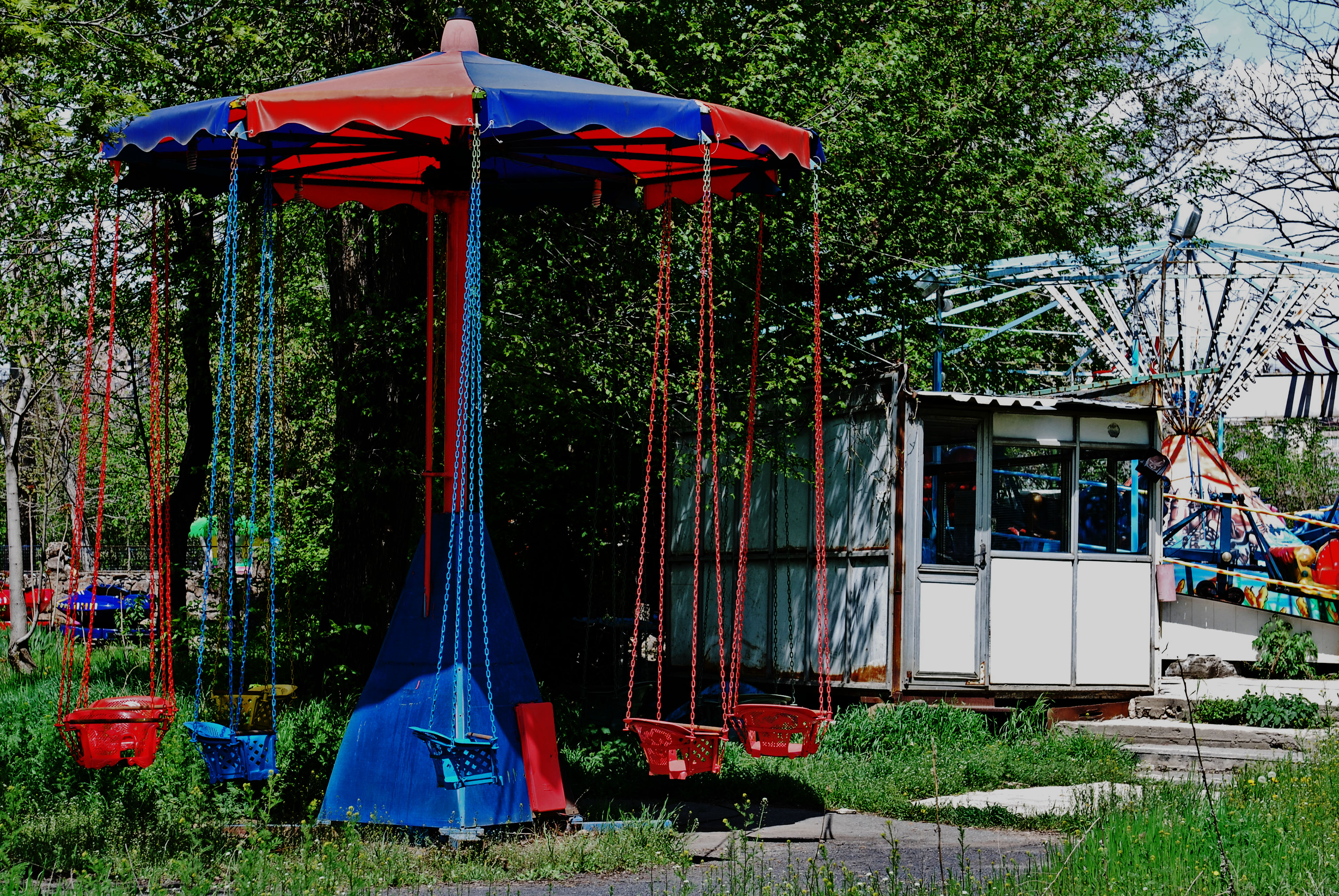 Walking in the very heart of the city, I often come across construction sites and abandoned plots of land: dusty spaces between a building and another where once the old apartment buildings stood. Yerevan urban landscape is dotted with cranes towering cement and steel skeletons. Krikor tells me that it is an increasingly common trend; in recent years, what we are witnessing is the tearing down of old buildings and the erecting of new ones: shopping malls and luxury apartments that remain uninhabited because only the few can afford to purchase them. “My family used to live where this building is now rising”, he explains, pointing at a modern building where there are lit shop-windows of a designer clothing store on the ground floor. “When the government decided to tear it down, they offered us a paltry compensation. Many residents refused to leave their apartment because with that money they could have never been able to buy a house if not in the suburbs and miles away. Eventually they were removed by force”. Krikor was lucky enough and managed to remain in the city centre, but it was not so for the many. 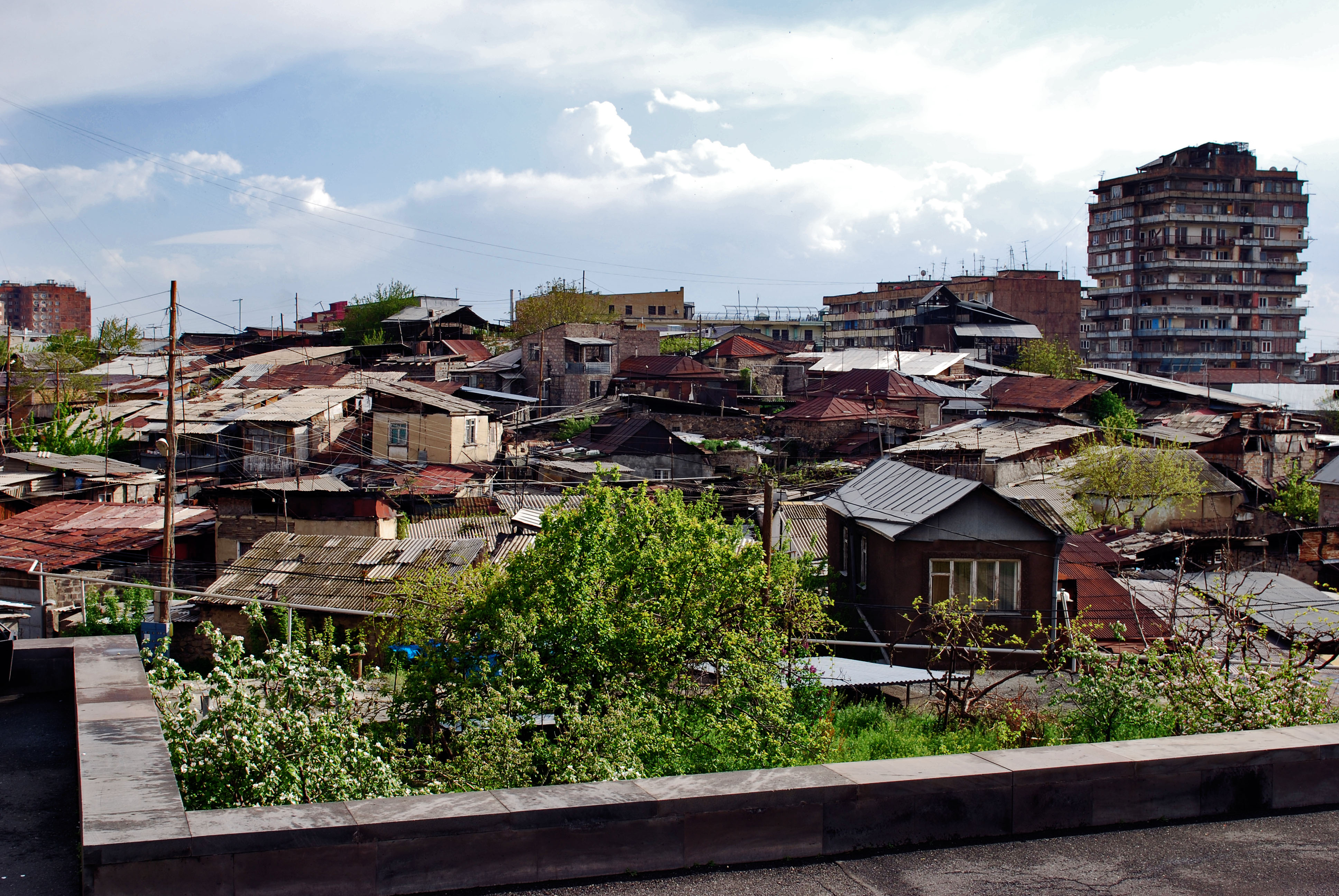 The following day, we set off early to Khor Virap, one of the most famous monasteries in Armenia. The sky is outcast with blue blankets of clouds and threatening rain. I already know I will not be able to see Mount Ararat which rises behind the monastery. The landscape, nevertheless, is just like a postcard. The monastery is enclosed by walls and perched on a hill like a medieval fortress; Ararat, the biblical mountain, stands imposing in the background with its eternal snow and an expanse of orderly rows of vines run through the land. 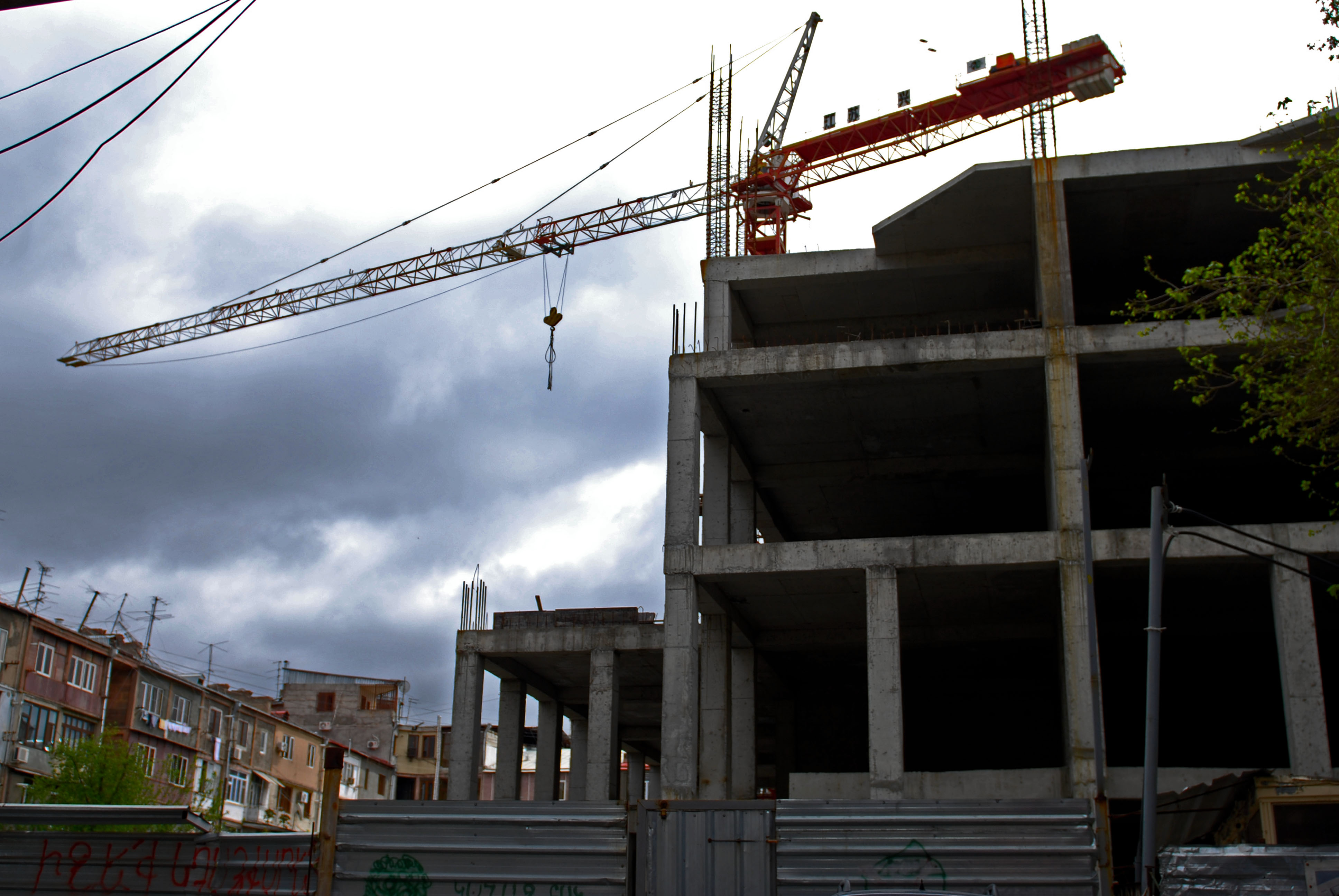 Khor Virap is an emblematic place, not only because this is the place of St. Gregory the Illuminator, the saint who brought Christianity to the Armenian land, and who had to face long imprisonment; this is ever so true also because of its location just a few kilometres away from the Turkish border, closed in 1993 and surrounded by barbed wire and guard towers. It is a political hot zone and Ararat, the mountain of the Ark, sacred to the Armenian population, seems to be there to reminds us of it. So close, yet so far; for the Armenian population it is another prisoner, an icon of the troubled history of its people, to which many poets have dedicated poignant verses of longing and regrets. Lenin was to “give away” the Ararat area to Turkey. The Bolshevik policy towards Armenia was intended to secure the help of the Muslims against British imperialism. Then the Treaty of Kars in 1921, eventually splitting the Armenian territory, the medieval capital of Ani and Mount Ararat, were thus left the newly created Western-Armenia to Ataturk. The Soviet Union had to be pleased and happy with the eastern part only, that piece of land which is now called the “Republic of Armenia”. 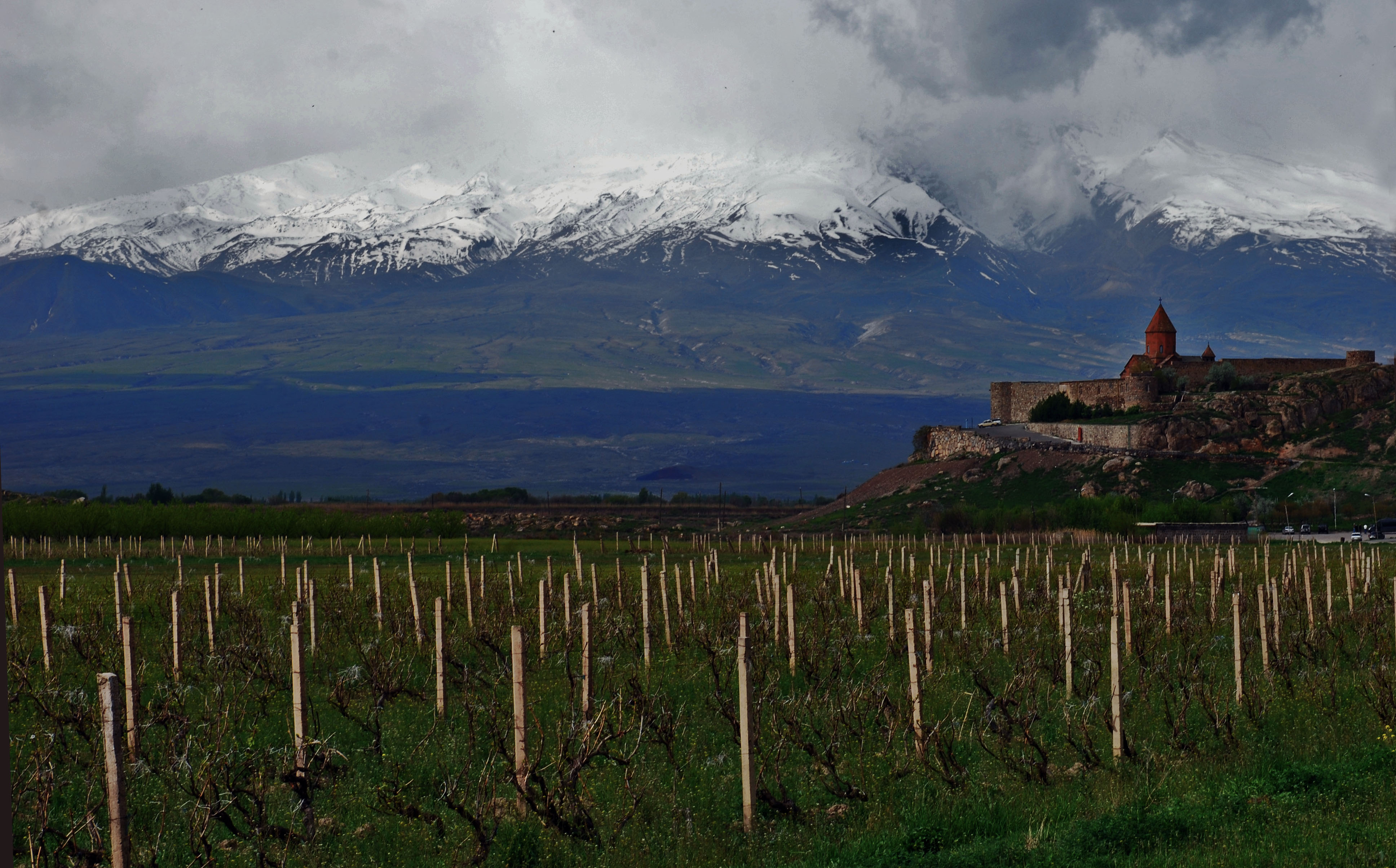 Khor Virap in Armenian means “deep well”. Indeed, it appears to have been in this monastery that King Tiridate III, the ferocious persecutor of Christianity, locked St. Gregory. Even today, those who do not suffer from claustrophobia can descend into the pit, the place of the saint imprisonment. “Legend has it that St. Gregory did manage to survive thanks only to the compassion of a woman who secretly gave him food through a slit in the wall of the well”, Krikor explains downing the steep of the iron staircase to the chapel. 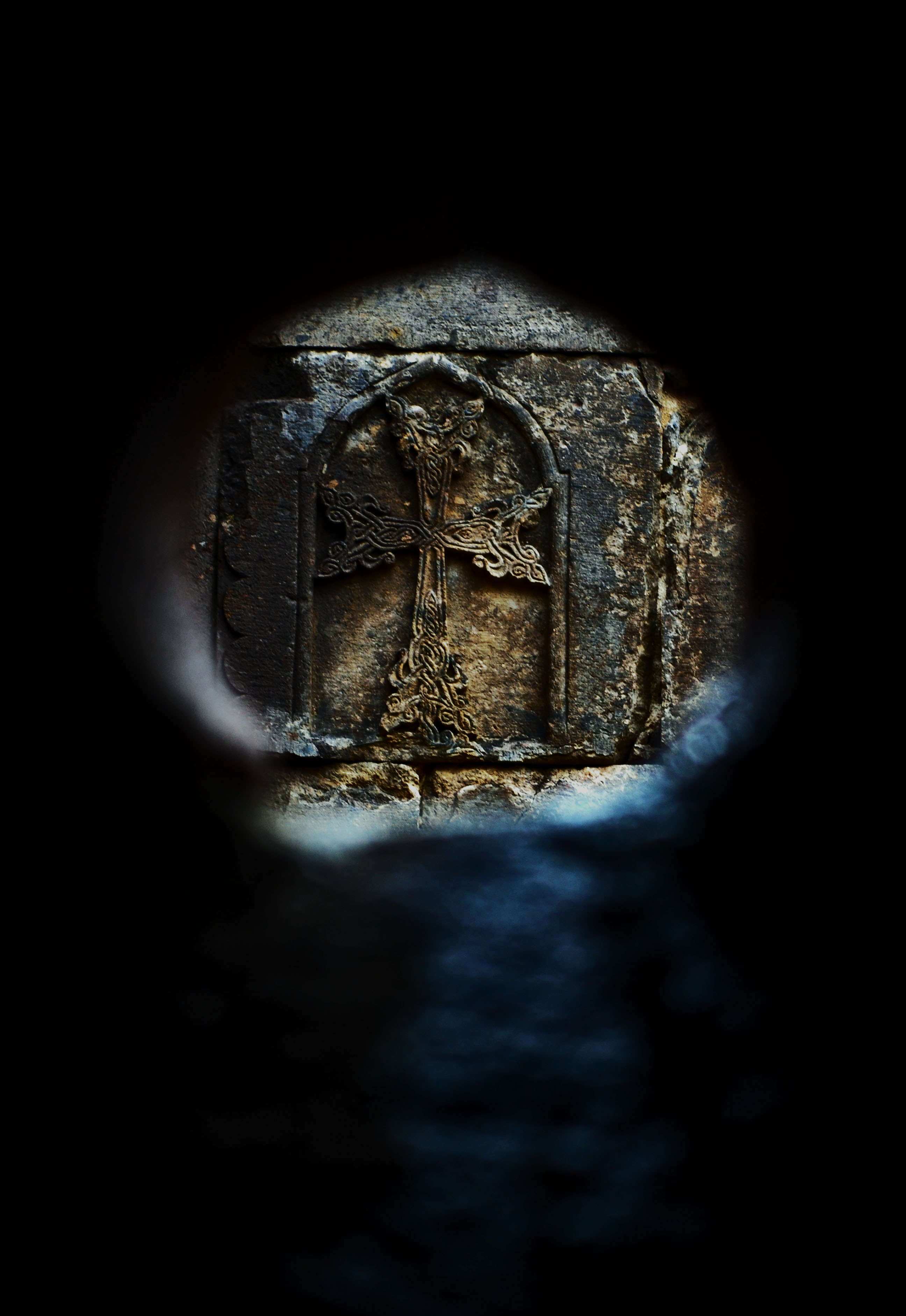 “But one day, the king fell ill with a strange disease that no one could cure nor heal. His sister had a dream in which it was revealed that the only one who could heal the brother was the prisoner of the well. St. Gregory healed the king and he was released”.

In that same year, in A.D. 301, Tiridate III converted and declared Christianity as the state religion. This makes Armenia the first country in the world to officially adopt Christianity. Even nowadays, the Armenian Orthodox Church, which has a “Vatican” in the city of Echmiadzin, is a fundamental element in the life of all Armenian citizens. “Christianity is an identity for us. It is truly a strong bond for and among our people”.

When we get near the church, Krikor pointed at some letters carved in the red stone of the outside walls. “In this monastery, the Armenians, fleeing the genocide of 1915, found shelter. These are the messages, and the names that people left on the church walls hoping to leave a record to their beloved”. 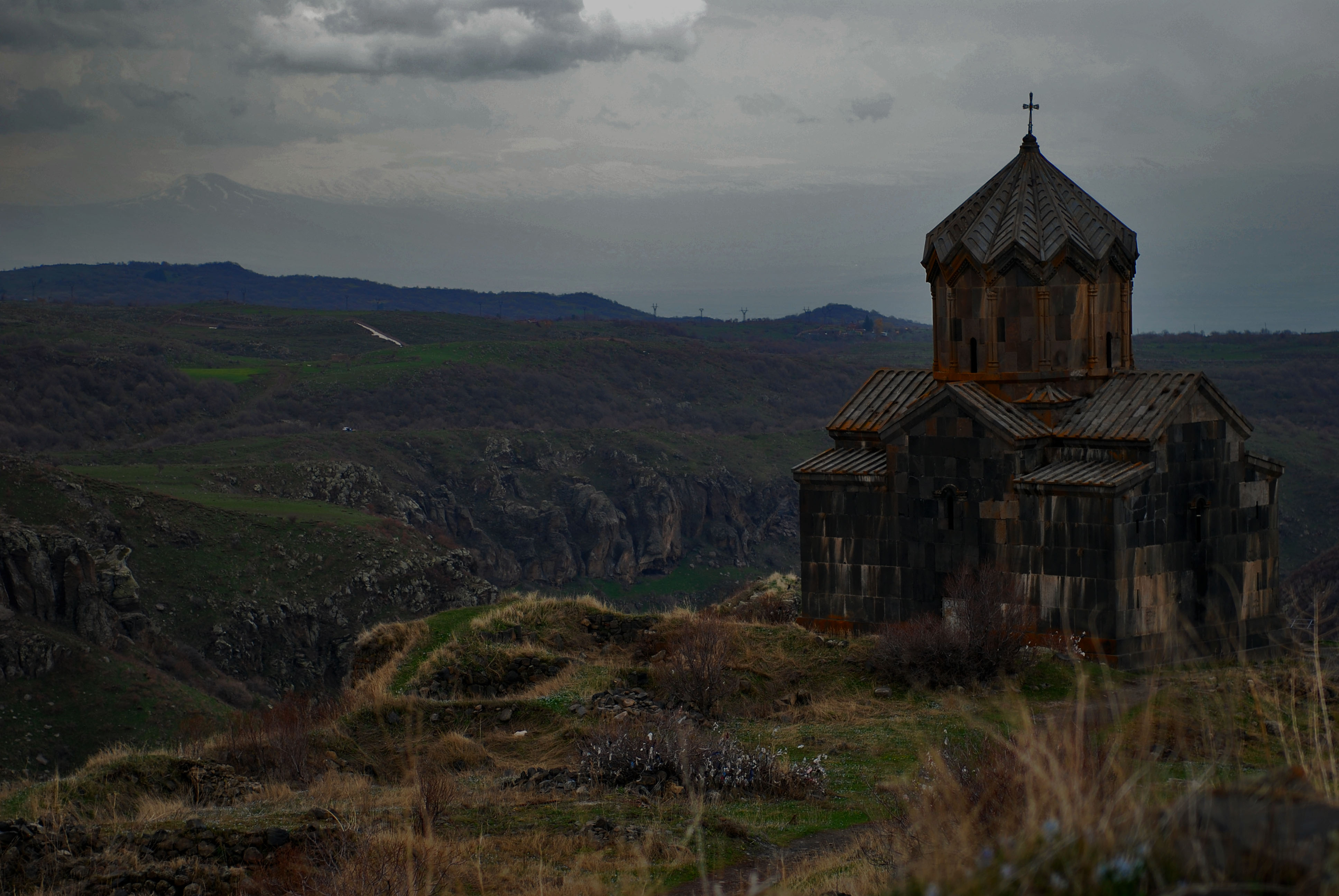