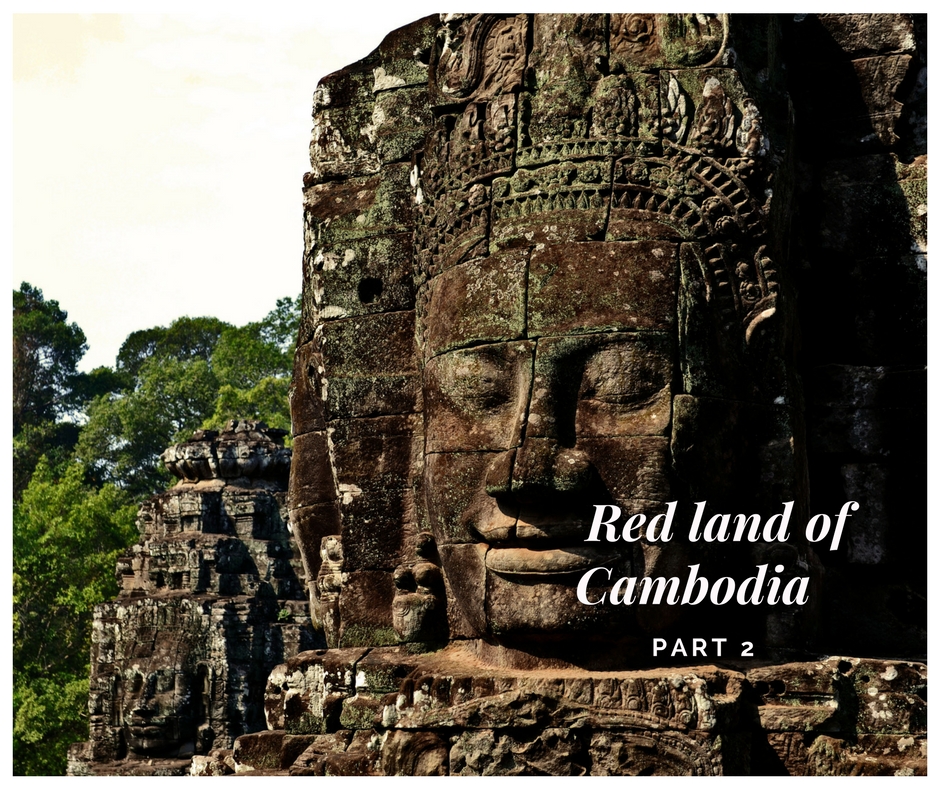 It’s morning, shortly after sunrise, and I ride an old bicycle on a badly paved road, cloaked by the jungle.

The golden light of dawn filtered dusty among the thick branches of the trees and falls on the red Cambodian land. All around is quiet: only the exotic songs of tropical birds hidden among the leaves breaks the unexpected silence.

I decided to visit the enormous archaeological complex of Angkor cycling, a vehicle which I thought was more suitable to enjoy the mystical aura of this haunting, charming place. 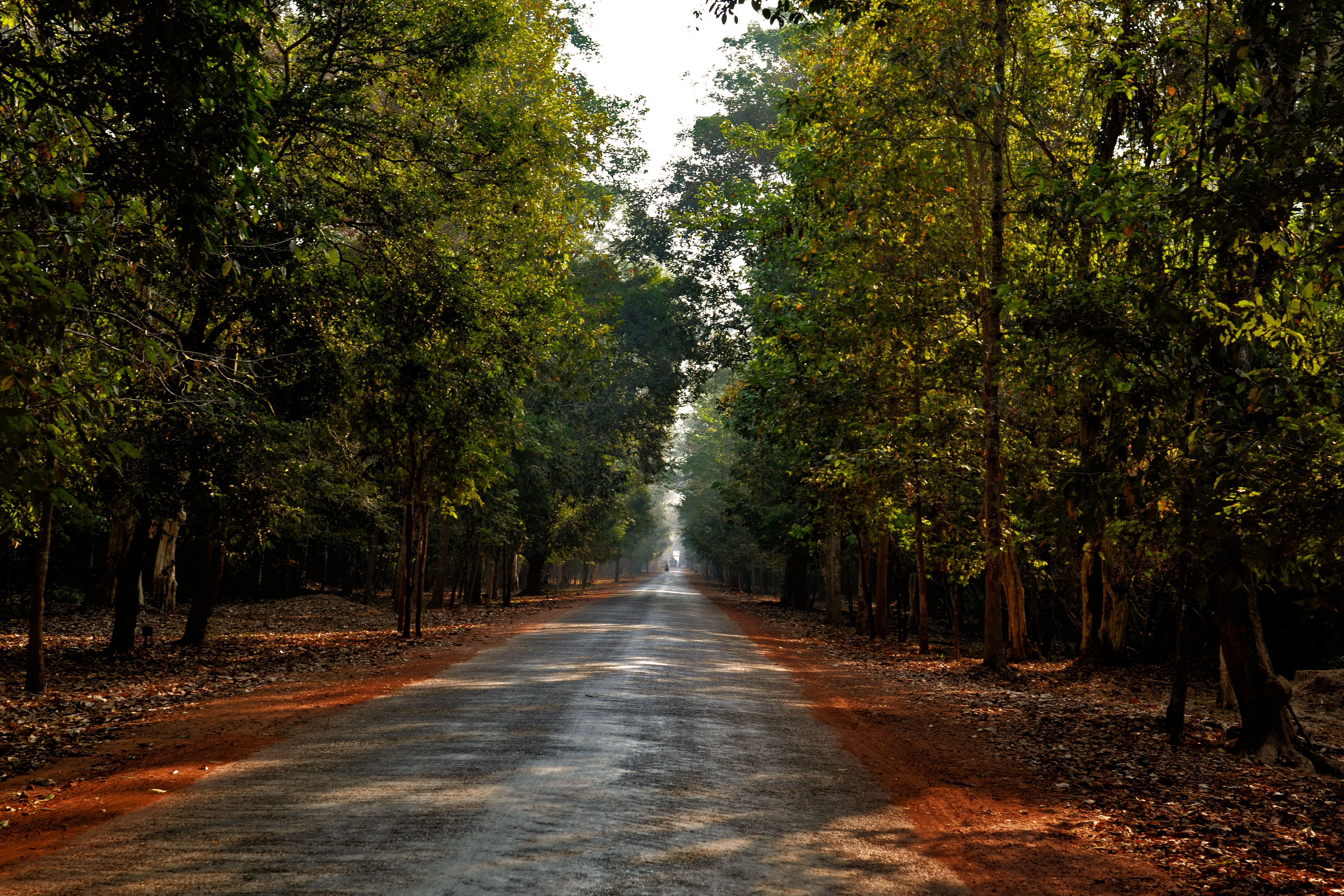 Angkor was the capital of the Khmer empire built around the ninth century AD in Kambuja, the land of the ascetic Kambu people, today’s Cambodia. The name “Angkor” is derived from the Sanskrit nagara and it precisely means “capital city”. Today, of that glorious city, what remains is only the monumental temples; instead of civil buildings, built in perishable materials being homes of ordinary mortals, we have no trace: they have all been devoured by time. What you see today is therefore a huge city made of stone temples, blackened by weather and surrounded by forests.

The Angkor period began in AD 802 with the government of Jayavarman II, the founder of the empire, who, on the sacred mountain of Phnom Kulen ushered Shivaism devaraja, the cult of the god-king, whereby the king is the earthly representative of god Shiva and exercises power by divine mandate. The period of architectural glory, however, started only under Indravarman, the first of the big builder sovereigns. The excavation of lake Indratataka, completed by his successor Yasovarman, gives way to the baray system, a feature of Angkor, the reservoirs of water that were used to provide the city with water, but also as an emblem of the primordial ocean.

The Angkor temple complex is indeed the representation on earth of the abode of the Hindu deities. 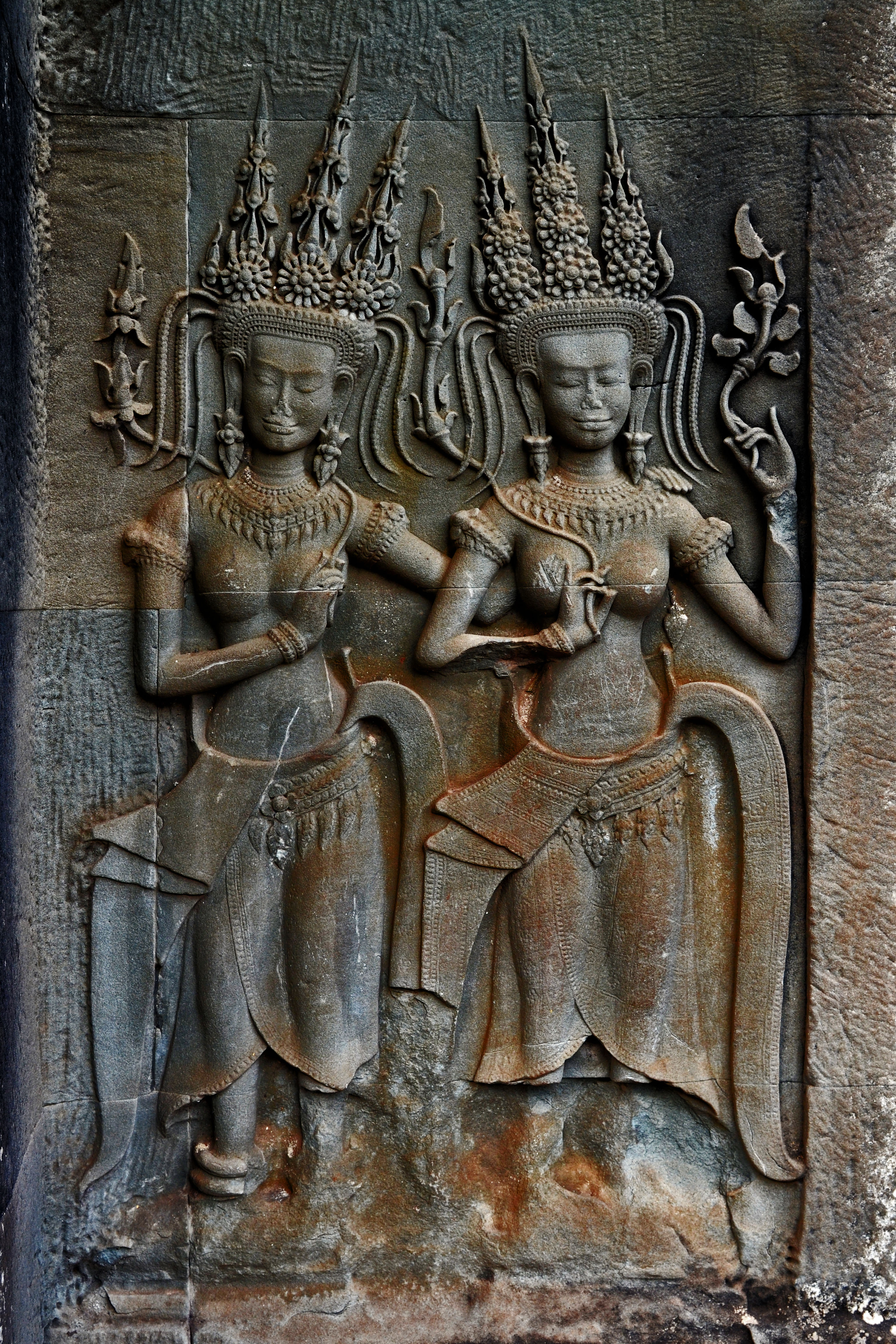 Each temple is full of symbolism and scenes from the Hindu epics Ramayana and Mahabharata. The bas-reliefs that enrich the buildings depict episodes from sacred texts and mythological characters, such as the sensual apsaras with their ambiguous smiles, dancing celestial nymphs, decorative motif introduced by Khmers who first began to carve them on temple walls. The sanctuaries are laying, or better are resting on platforms rising towards the sky topped by spires, referred to as prasat, which reproduces the cosmic mountain, the home of the gods and the centre of the universe. These towers, richly carved with bas-reliefs and niches garlanded by flames, develop on false floors and end with decorative patterns in the shape of a lotus flower, symbol of purity.

Angkor architectural elements are never at random. Serpentine balustrades represent the naga, the multi-headed snake of Hindu mythology, that symbolizes the connection between heaven and earth. The balustrade that borders the access bridges to the Angkor Thom complex is the representation of the “churning of the ocean”, mythological episode narrated in the Mahabharata. The snake makes a parapet which is governed by an ingenious system consisting of mighty statues of the milky ocean of giants, each carved with a different face, in the act of pulling the body of the cobra. The myth is set in an era of clashes between devas, the gods and asuras, the evil spirits. 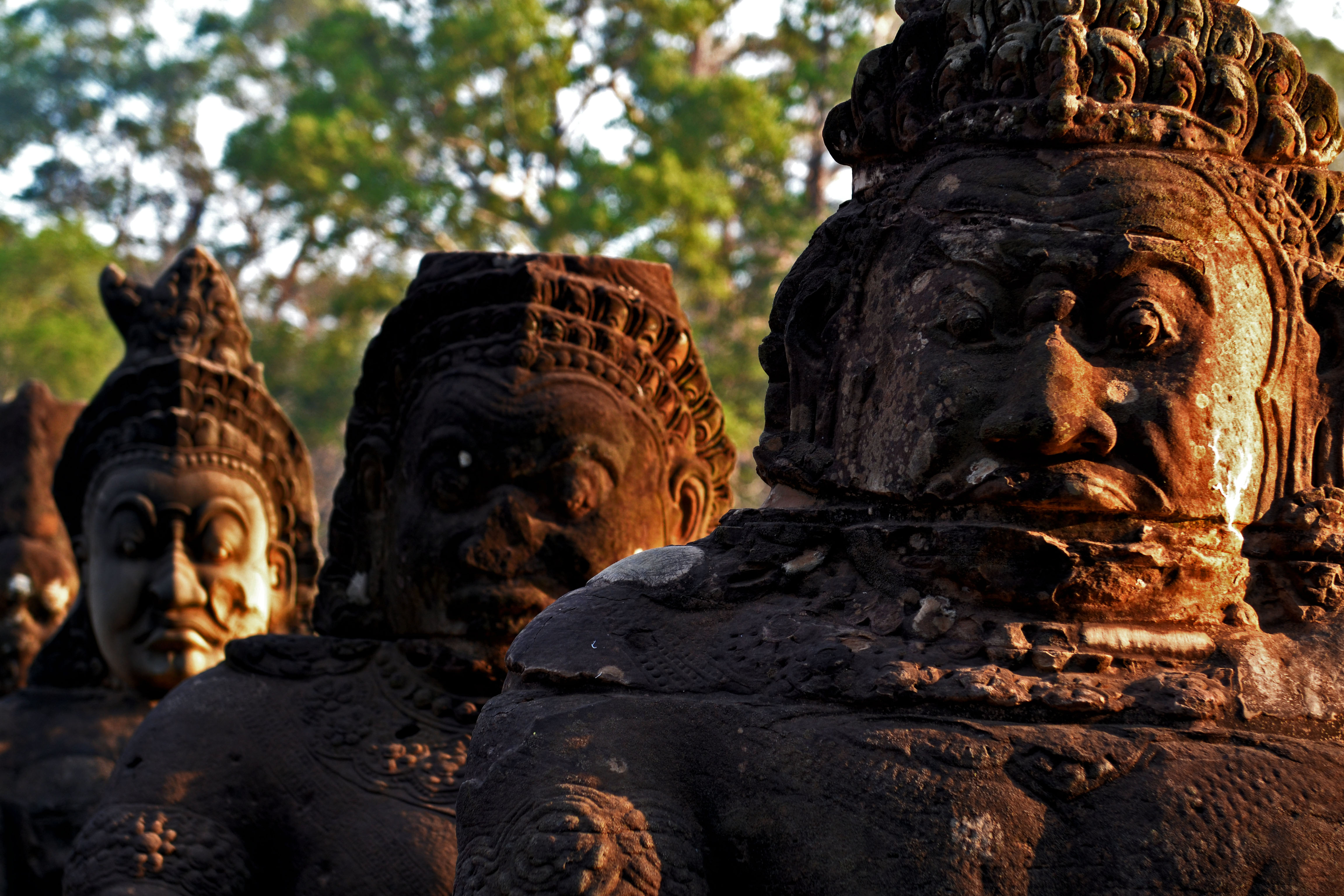 Legend has it that to win the battle between the gods and the demons, Vishnu suggested a ploy to divinity in order to procure amrita, a nectar that can make those who have drunk it immortal. But since the ambrosia was in the depths of the milky ocean, the gods needed help from their enemies. Therefore, they made a devious alliance with the asuras promising them to share the nectar. To extract amrita they used Vasuki the Serpent, which was coiled around the cosmic mountain; then, devas on one side and asuras on the other, grabbed the long body of the animal and began to pull it by rotating the mount in order to churn the milky ocean and extract the ambrosia. Once amrita was obtained the gods were able to cheat and deceive demons. They drank the nectar and became invincible defeating the asuras once for all.

Another fine example of symbolism is the Bayon Temple around which Angkor Thom (literally “big capital”) was built. The building was erected by Buddhist king Jayavarnam VII who, in 1181, reconquered Angkor, fallen under the Cham Empire and replaced Shivaism monarchy with Mahayana Buddhism, identifying himself in Avalokiteshvara, the bodhisattva of compassion. The Bayon Temple, with its 216 ecstatic faces of Avalokiteshvara carved on the towers, is rich in symbols borrowed from Hindu cosmography. As a representation of the sacred Mount Meru, the protagonist of the mountain extraction myth amrita, this temple symbolises the metaphor of the indestructibility of Angkor Thom. Jayavarman VII was obsessed by the idea of invincibility: back from a war against the Cham people who dared to loot Angkor, the symbol city of the sovereign power, felt the need to re-consolidate the authority of his empire. 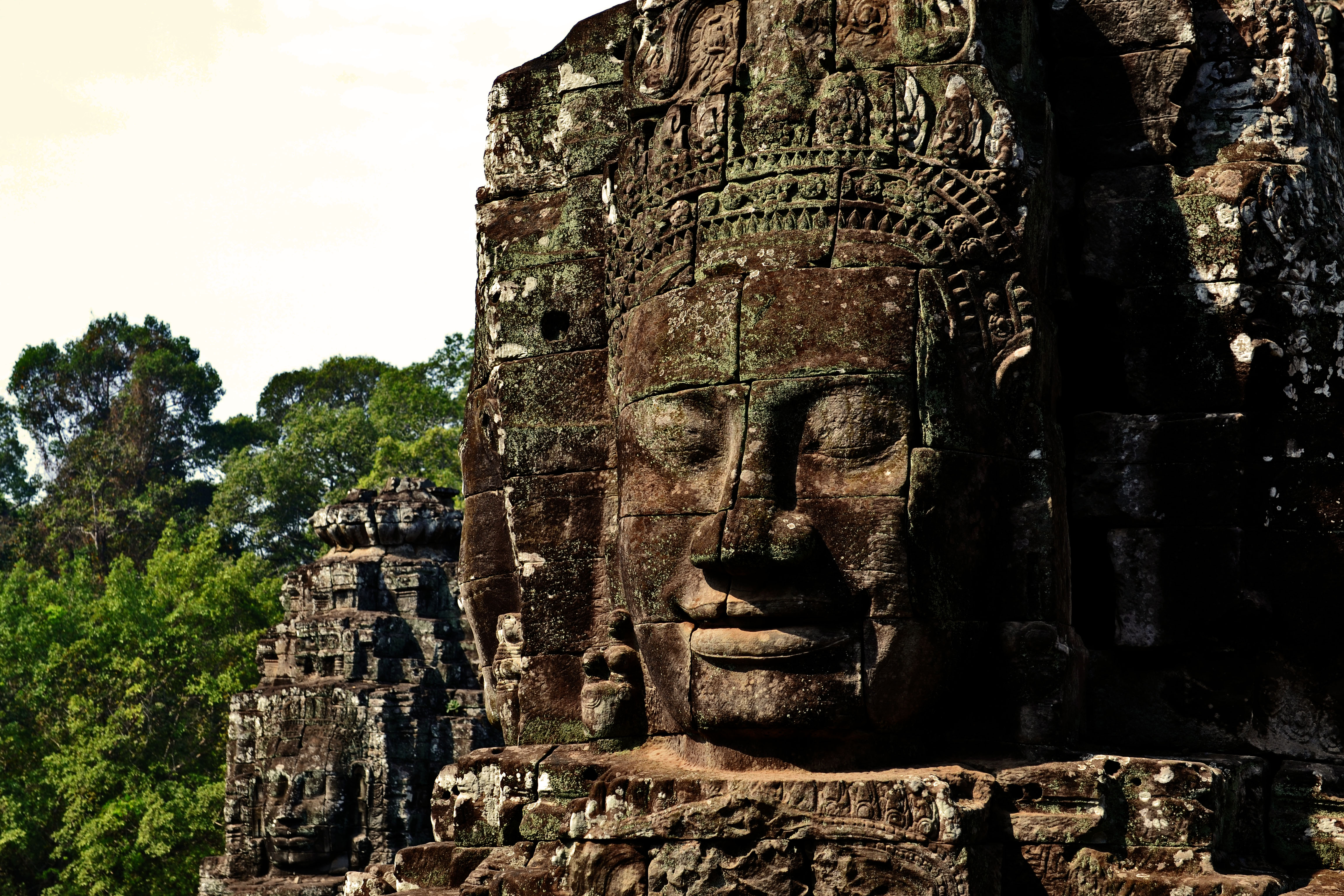 Angkor eventually fell in 1431 because of the Thais and was slowly covered by the surrounding jungle. The Angkor Wat Temple (the most famous and visited temple), however, was turned into a Buddhist monastery and continued to be popular. The ancient capital, even though sporadically visited by foreigners over the centuries, came to the fore only after the publication in 1868 of “Voyage à Siam et dans le Cambodge” by Henri Mohout, who had gone in Indochina for an expedition funded by the Royal Geographic Society. The book obtained immediate success and fuelled the imagination of romantic adventurers and scholars who came in order to study Angkor and to contemplate its ecstatic beauty.

Temples are now restored with the help of some foreign countries, including the United States and Japan, and released of the vegetation that had taken possession of the buildings corroding them year after year. However, there is a temple deliberately left in the clutches of nature and only partially restored thanks to the participation of the Indian government: Ta Prohm.

Here the jungle still eats the stone temples and high ficus trees surround the buildings with their sprawling roots destroying them gradually in a tangle of branches and lianas. At Ta Prohm, immersed in the morning silence, you can relive the poetic suggestion of temples besieged by forest, that deep feeling of decadent glory that must have tried the first explorers in front of the ruins of Angkor. This is ever so true if you visit it in the morning, when the crowds of visitors of organized tours are still engaged elsewhere, so to capture the Gothic silhouette of the Angkor Wat Temple reflected in the north-western basin at dawn. 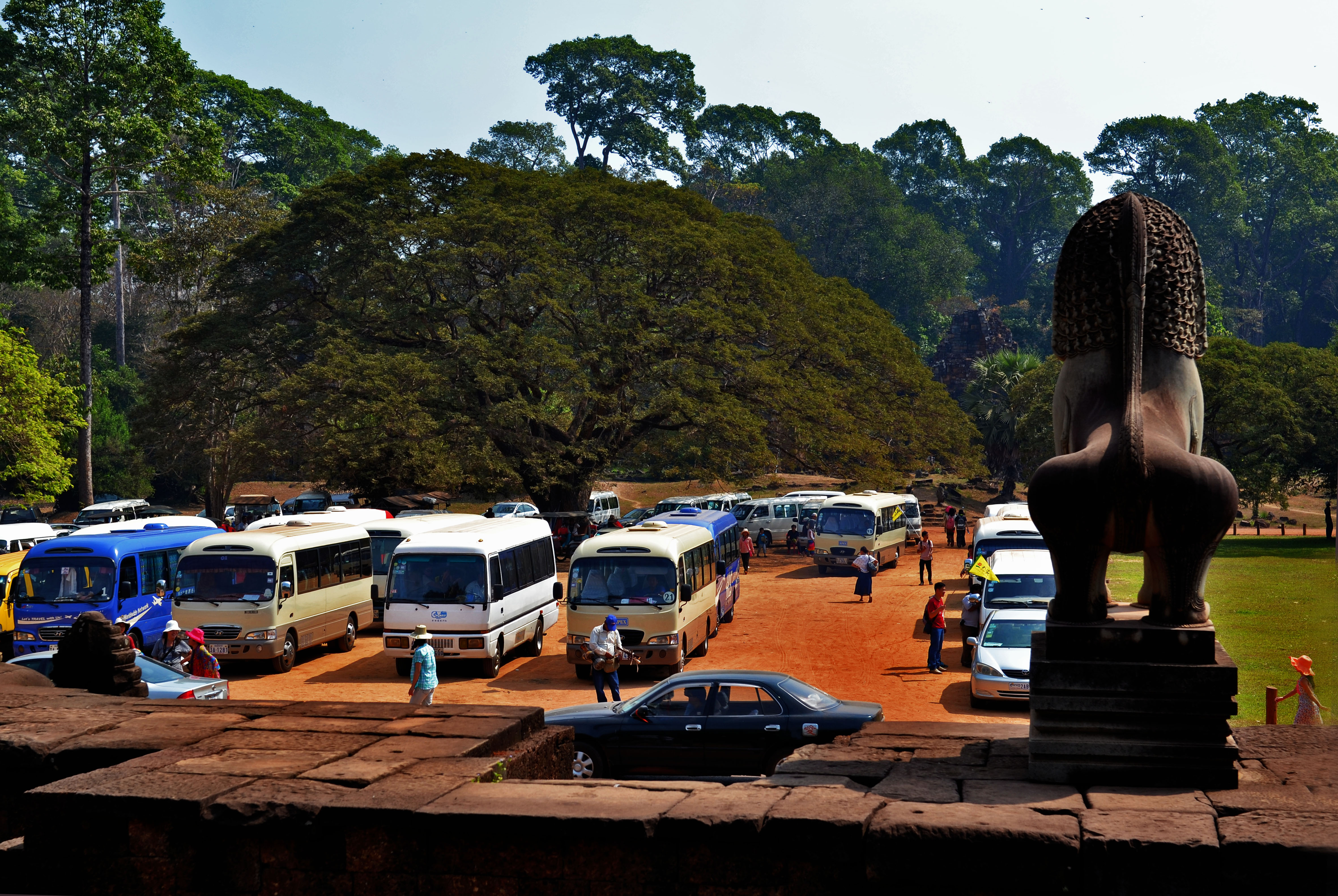 If once the temples were besieged by the jungle, they are now besieged by tourists. Tourism, with an annual average growth of 14%, is one of the leading economic sectors of the country. According to the Cambodian Ministry of Tourism the influx of foreign visitors has almost doubled in five years, going from 2.508.289 in 2010 to 4.775.231 visitors last year (2015). Angkor is an emotional and cultural enrichment for everyone who visits it, and the increase of tourists generates jobs in one of the poorest countries in the world (Cambodia is the thirteenth nation in Asia by degree of poverty). However, the massive influx of tourists is due to recent preservation problems. Lately the Apsara Authority, the body that deals with the protection and management of cultural heritage of Angkor, has taken some key measures to safeguard the archaeological site. It was necessary to set an maximum limit of 300 visitors at a time on Phnom Bakheng, the pyramidal sanctuary from which you see the sunset over Angkor Wat Temple. Checks have been intensified to discourage disrespectful tourists climbing on balustrades and buildings. Some paths were covered with wooden walkways to preserve the stone floors from the endless flow of visitors. The masses of holiday makers of package tours are also an additional factor to the detriment of tourism: the large noisy groups of people only interested in getting selfies to be posted on social networks, destroy the aura of spirituality that permeates Angkor. They cover with their voices, without restraint, the sounds of the surrounding jungle and obfuscate the splendid architecture of the temples. On this theme, the words of Tiziano Terzani  were prophetic when he wrote in 1993: “Angkor, because of, or maybe we have to say, thanks to the war, which for decades has overwhelmed the entire Indochina in misery, is not yet on the path of the barbarian hordes of tourists; It is still intact, undisturbed, virgin, perhaps the last of the great wonders of the world”. 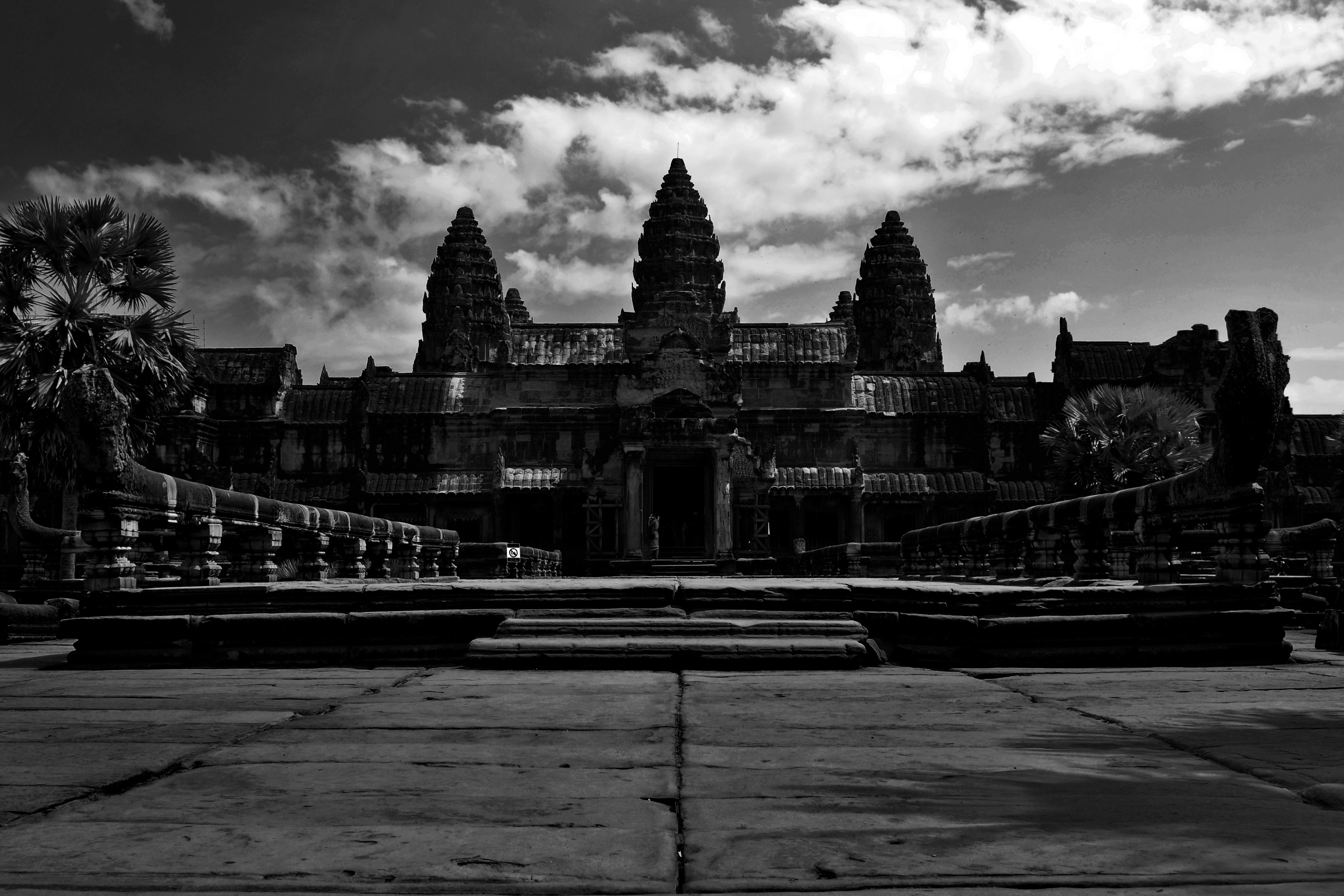