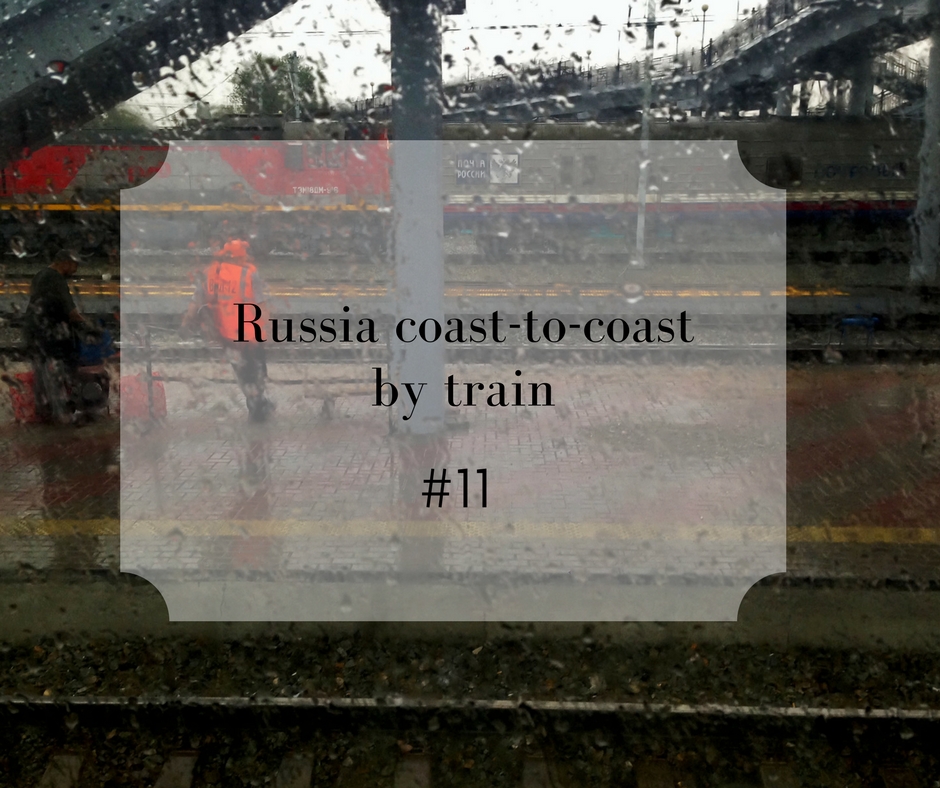 For my endless journey westwards I have the seat number 6 in the wagon number 0 of the worst-platzkart ever. Just one working plug, which is located on the bed under mine, so that anyone who wants to load some electronic devices has to do it on the head of the poor man who sleeps there. Empty drinking water tap: we must drink the boiling samovar water, which would not be so annoying if it were not that air conditioning is faulty and the wagon is terribly warm.

The provodnitsa of the night shift is a brusque, short and chubby woman, of those who, as they say in Rome “it’s easier to jump than to go around”. The other one is a gentle skinny lady flame haired. Together they seem Stan and Oliver, but at least the fellow travellers are interesting. Below my bed there are a old couple. He, Vova, has black moustache, grey eyes made heavier by the age, huge round fingers and he is covered in tattoos. She, Valya, has short cut hair and her face streaked with slight wrinkles, she is a cheerful woman and she has nervous chatter. They are directed to Moscow, they speak only Russian and they virtually adopt me. The train leaves and the lady pulls out tablecloth, metal cups and plastic containers filled with everything imaginable food. They offer a bit of their dinner Valya tucks in my soup freeze-dried pieces of smoked ham and without asking me anything, she peels boiled eggs and hands me the bread. I think I must have awakened her maternal instincts, she wants to feed me at all costs. Maybe I stink with my skinny vegetarian sandwiches and Korean soups from the discount supermarket.

They tell me many things (who knows what) and call me “Kristin”. I ask them, in my weird Russian, where they are from. They come from a place that is not a city, but a tongue twister, though I pretend to have understood; anyway I have no choice because they will continue to talk to me as if I really could understand what they say, asking me questions they expect me to answer.

The following day the heat does not let up, and the people in the wagon fan themselves, dripping with sweat, with everything that falls into their hands. To survive the heat, the Uzbek of the seat number 12 begins to open all the windows of the wagon, including the one on my bed. He supports it with a plastic bottle filled with kvas (a Russian drink made from fermented black bread) to make sure that it does not close and he has decided it must stay there. So I have to sleep with the bottle at the side of the pillow. The idea of the open windows is good for the day, but not for the night. At sunset, the cold air of the Siberian nights enters through the window like a sharp blade and lash my face mercilessly. I curl up as much as possible in the cotton blanket, but I can’t get to sleep so I get up at dawn when the whole car is still sleeping. I prepare my tea and I drink watching the landscape in motion. It is raining outside. The dense wiry birch forest is covered with a rosy morning mist through which the sun shines in a dance in which chases the train, appearing and disappearing among the white tree trunks.

We skirt for a long time a large muddy river on which a graceful mist hangs like a long nebulous snake concealing its banks. After few hours the landscape changes and the train makes its way through dark valleys still shrouded in mist and meadows covered with tall flowers of a bright pink. The rain continues to tap on the glass only disturbed by the passage in the corridor of a fat provodnitsa whose flesh barely stays inside the shirt. The upbeat music coming out of the basket of snacks she is pushing announces her presence. “Pirojki, kartochki…” she loudly proposes passing through the wagon. The Uzbek of the seat number 12 makes a joke, she plays along and gives him a playful slap. Everyone laughs, he must have said something funny. 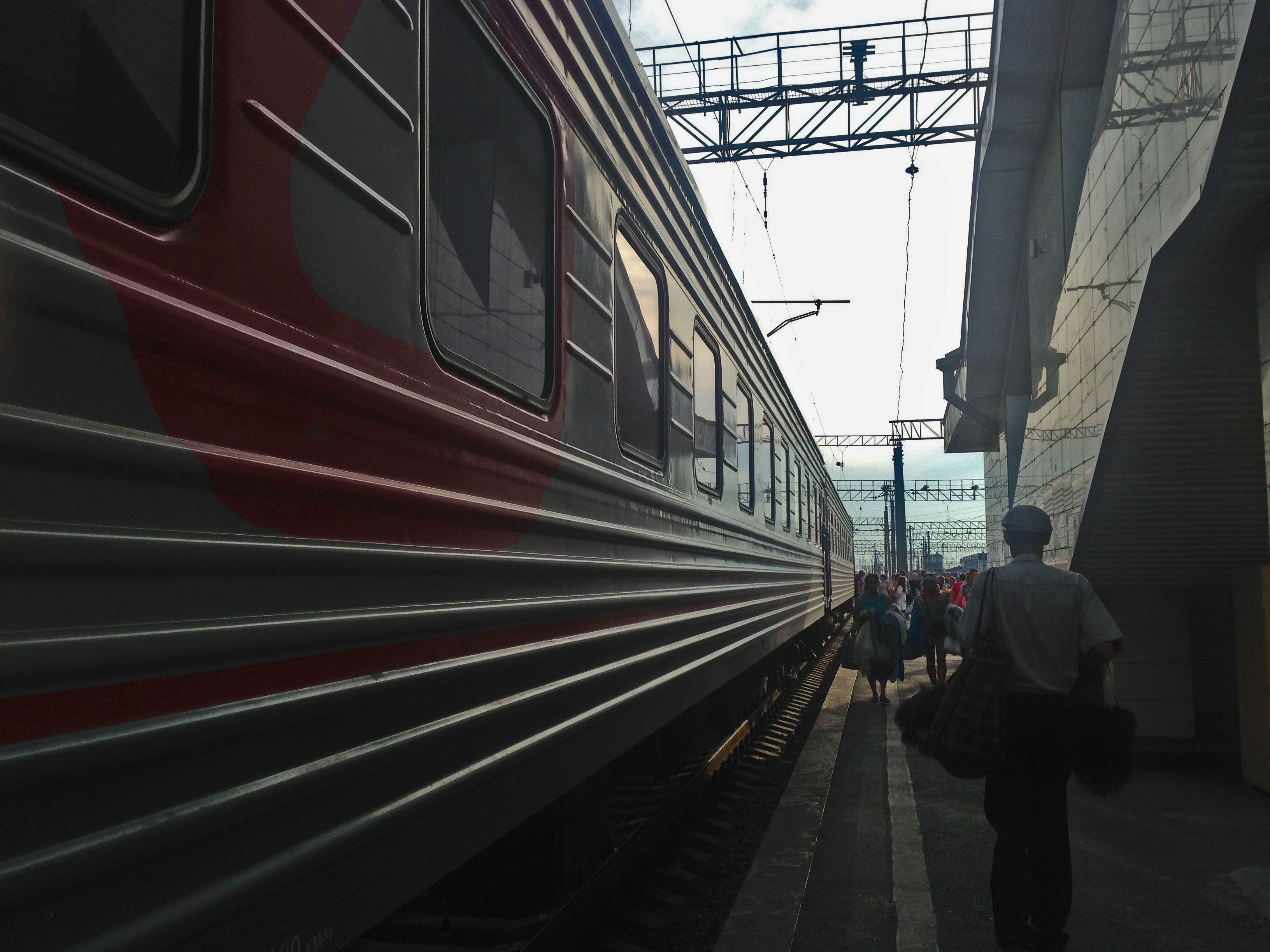 Not speaking Russian is one of the things I regret, I think watching them laugh. If I had been able I would chatted with my fellow travellers, with the provodnitsa. Who knows how many stories I missed, how many anecdotes and opinions on this or that topic. Why so much they, the Russians, always have something to say, they are a people of great talkers. I find it hard to imagine them the way Kapuscinsky describes them the USSR times. The Polish reporter (who also travelled in the Trans-Siberian) writes of them that they remained silent, distrustful, they avoided to speak and hoped that no one performed questions.

It was another era, shaped by suspicion towards each other, by the fear of uttering too many words, to sound curious. All dangerous characteristics at the time.

“The foundations of the Soviet empire have always been the regime of terror and fear. Only perestroika and glasnost’ constitute a significant departure. People are starting to publicly express his opinions to have their own ideas, to criticize and to ask. This becomes an exaltation, a general drunkenness […] everywhere do nothing but talk, talk and talk. […] This verbal superabundance, that talkative oratory is favoured by the Russian language, phrasing from that large, lying, boundless like the Russian land”.

The third day of travel some young Russian soldiers get on the train. They are teens guys who are doing the canonical year of conscription. Among them myself, the bizarre italianka, am a note from the pack and within five minutes they all are making me questions. Where am I from? Do I speak Russian? What am I doing in Siberia? Am I really travelling alone? And they start making pictures of me. Everyone wants souvenir selfies with this being that comes from the exotic faraway Rome. This “young Russian army” does not travel alone: it is accompanied by a non commissioned officer who looks like the same age of the boys he is responsible for. Talking to them I discover that the conscription in Russia is mandatory. Every boy at the age of eighteen must pay a year in the army. They were lucky, Sergej tells me, the only one who speaks few words of English, up to 2008 the years of conscription were two. He smiles at me and he offers me an apple. 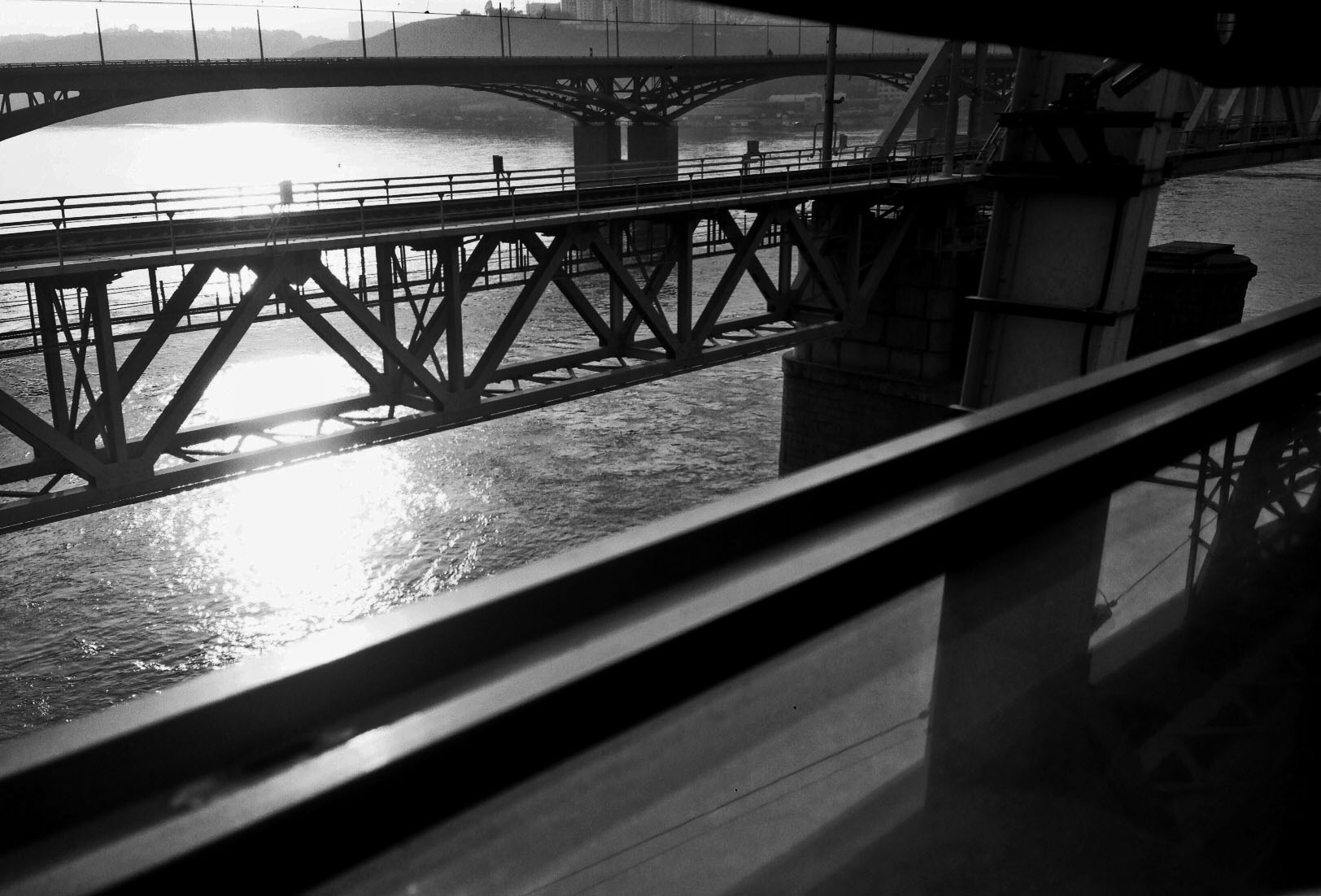 The following day the Russian army gets off in Krasnoyarsk and new travelling mates get on the train. Among the newcomers there are six girls, contemporary dance dancers. One of them is specialized in hip hop. They make me look some videos on their phones and even if I do not understand anything about dance, they seem to be really good. I was told that they travel to Ekaterinburg where they have an appointment at the US consulate to pick up a visa to go to California where they will participate in a popular dance competition. They are a bit worried, Ekaterina, one of them says. The US visa is not mere bureaucracy for Russian citizens: the girls will first have to undergo an interview with the console. Those among them who are not married are more anxious because the US government does not look kindly on the Russian unmarried women; the cliché has it that the Eastern European girls use to lure American men to get married in order to to obtain the US citizenship.

A few hundred kilometres after Novosibirsk, the capital of Western Siberia, we arrive at the station of Barabinsk. The passengers before leaving the car, consult the table affixed to the provodnitsas’compartment door, which shows the time spent at each station. In this way those who want to get off to buy something to eat, or just to stretch their legs or to smoke, know for how long time the train will be stopped before leaving again. Ekaterina invites me to come down with her friends, she wants to show me the itinerant fishmongers of smoked dry fish waiting passengers on the platform. Apparently this fish is a speciality in high demand as everyone rushes to buy this delicacy with enthusiasm. We walk up and down the platform to look at our travel companions carefully choose their dinner, and a merchant of fur hats furry tries in vain to convince me to do a deal by buying one. It’s time to climb aboard and all people happy with their food purchases, get on train. In the wagon now an air unbreathable hovers: a mixture of smoked fish and musty smell united to that of about twenty people who haven’t had a shower for days. You get used and, in the end, the fish is tasty. The blonde lady of the seat number 22 makes me taste it. She is going to Moscow to visit her grandchildren. The woman on her fifties is from Norilsk, a Siberian town far to the north, where summers last a month and winters, endless, record a temperature that is about -35°C. Ekaterina translates the lady tales for me, while she makes the fish into small pieces. She is amused to see my face in disbelief. At her eyes me, the italianka tourist, am a strange being that comes from the tropics. 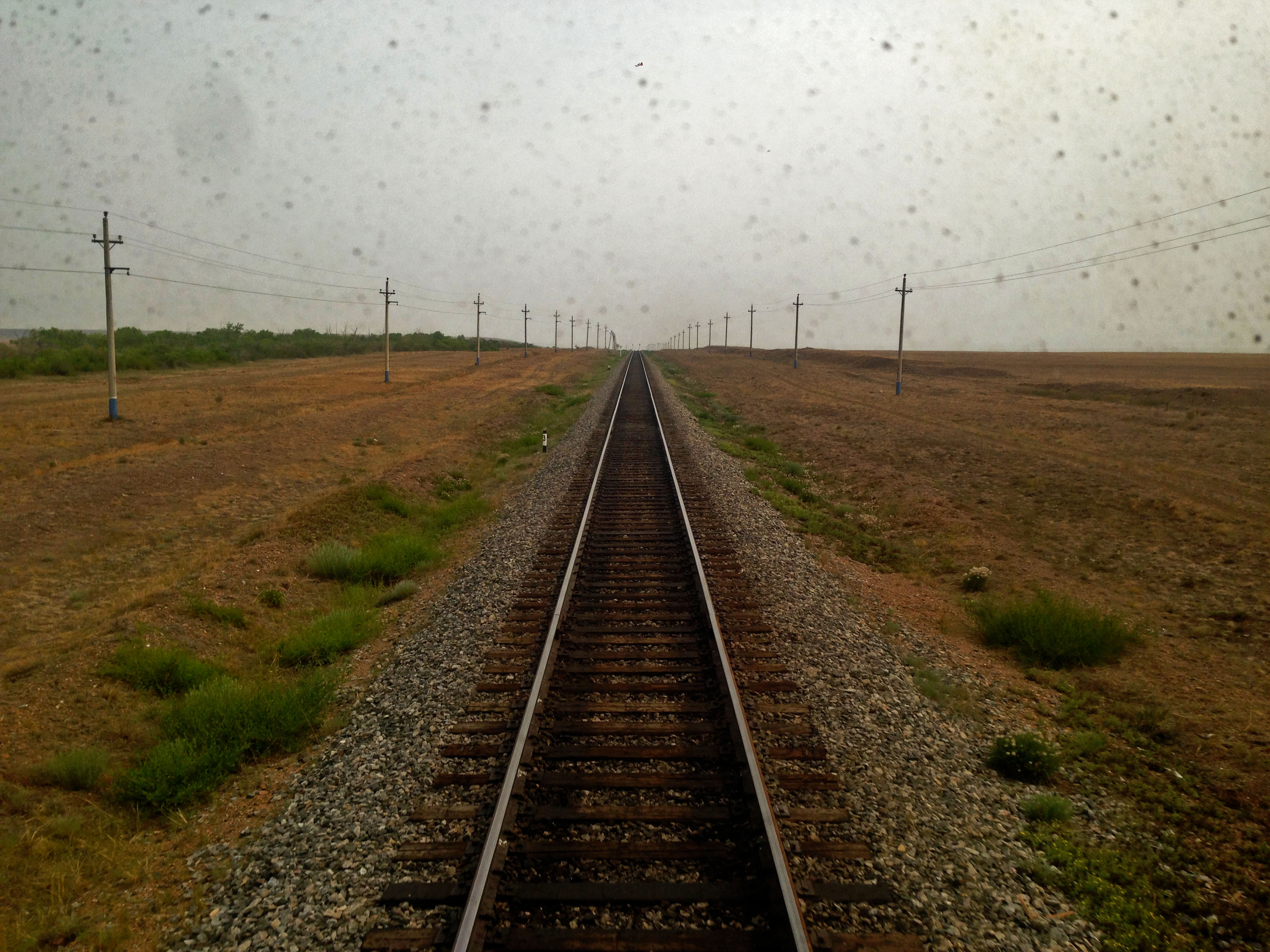